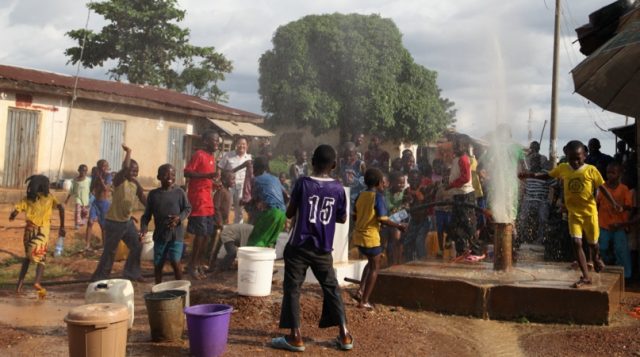 “This is an important project for Kwali township and its surrounding areas, putting an end to water shortage,” said Estu Shaban Audu Nyizazo III, chief of the Nigerian township.

He made the remarks when introducing a water supply system donated by Chinese enterprise CGC Overseas Construction Group (CGCOC) that started operation two years ago.

“Everything about the system has been going well and the clean water will give us a great Durba this year,” Dogo Kwali Gambo, the chief geologist of Kwali Area Council recently told the CGCOC Nigeria Company over the phone.

The town of Kwali had two small water plants built in the late 1980s. However, they weren’t able to offer constant water supply due to poor maintenance and became abandoned because of sand production and tube breakage.

The 600,000 residents in Kwali had lost their fixed source of drinking water ever since, and the water shortage was even more severe in the dry season, said a Nigerian employee of the CGCOC in charge of public relations, adding that water supply became the most pressing problem for the town.

Nyizazo III introduced that most of the privately drilled wells were shallow, so the water was always easily contaminated in the rainy season. Besides, the high maintenance and diesel price for generators were also a problem, he added.

To offer clean water for local residents as soon as possible, the CGCOC decided to transform the two existing water plants and upgraded them with an automatic solar-power system. The company also installed new tubes to connect villages and opened more stations for residents to fetch water.

The new system supplies 160 cubic meters of water each day, which is able to meet the demand of 10,000 people. It needs no manual operation and consumes no material, even in regular intensity of sunlight, which is both environmentally friendly and energy-saving.

“This is a special gift to Kwali by the CGCOC,” said Bello during the completion ceremony of the project, after taking a sip of the water that ran out of the system.

“We had to pay at least 300 naira ($0.78) for a bucket of water before, which made it 50,000 naira a year for a thrift family of seven, or my monthly salary,” said a man surnamed Emmanuel from Kwali. “Now we all have clean and healthy water,” he added.

Umar, another resident in his 50s is disabled due to polio, which makes it hard for him to fetch water from afar. “We never thought we could have clean water in the past, and now we are helped by the Chinese company. What runs in the water is the friendship from the Chinese people,” he told the People’s Daily.

“We came to Nigeria in 1983, and our development here could not have been achieved without the assistance from the Nigerian people. Therefore, we shall give back to them today,” said Ye, saying donating the water plant is a way for the Chinese enterprise to repay the local people.