It is a special pleasure and privilege to be here with you this afternoon.

The 19th National Congress of the Communist Party of China (CPC) opened in Beijing early today.

We are deeply appreciative of President Muhammadu Buhari’s message of warm congratulations to President Xi Jinping on the occasion of the opening of the Congress.

I think the Center for China Studies of Nigeria deserves every commendation for providing this timely platform, for discussing the global significance of the 19th CPC National Congress and its implications for China-Nigeria strategic partnership and China-Africa cooperation.

I am very grateful for the invitation to share some background information and my personal observation.

The CPC is the largest and strives to build the strongest ruling party in the world. The Party’s role is central to running China’s affairs well. In this sense, the ongoing 19th CPC National Congress is indeed a key meeting at a crucial time for China with appreciable global significance. The Congress will review the Party’s work over the past five years and chart the course for China’s development and foreign relations in the next five years and beyond. A new Central Committee and a new Central Commission for Discipline Inspection will be elected at the Congress. Then a new leading organ of the CPC Central Committee will be elected by members of the Central Committee at its first plenary session the next day after the conclusion of the National Congress.

The CPC takes intra-Party democracy as the lifeline of the Party. Delegates to CPC congresses and members of CPC committees at all levels are elected by secret ballot. It is explicitly stipulated in the Party constitution that no organization or individual shall in any way compel voters to elect or not elect any particular candidate. In about one year starting from November 2016, 2280 delegates have been elected to attend the 19th CPC National Congress after full deliberation and discussion by Party organizations and voters. The election of delegates was a chain process with at least five links: recommendation for nomination, examination by Party organizations, determination of the list of preliminary candidates, determination of candidates, official election of delegates. 99.2% of the 89 million CPC members nationwide participated in the election process.

When the CPC was founded in 1921, there were only 13 delegates at its 1st National Congress representing 50 plus Party members nationwide. The 13 delegates were 28 years old on average. It took the CPC 28 years to overthrew the Chinese Nationalist Party (KMT) regime and found the People’s Republic of China. When new China was founded on October 1st 1949, it was one of the poorest and most backward countries in the world. Life expectancy at birth for the Chinese then was a mere 35 years. Under the leadership of the CPC, China has gone through tremendous changes during the past 68 years. More than 700 million people have been lifted out of poverty since China’s reform and opening-up policy was adopted in 1978.

Since the 18th CPC National Congress in November 2012, China has made further remarkable progress in economic and social development. China’s 2016 GDP of 11.2 trillion USD accounted for 14.8% of the world economy, up 3.4 percentage points from 2012. China created more than 13 million new urban jobs annually for four consecutive years in 2013-16. New jobs created in the first eight months of this year stood at 9.74 million. The number of rural people living in poverty dropped to 43 million last year from 99 million in 2012. Currently, the goal is to eradicate absolute poverty in the country by 2020. Murder rate in China is one of the lowest in the world. In 2016, the rate stood at 0.62 per 100,000 people. In the same year the number of cases of serious violent crime in China fell 43% compared with 2012, and the people’s level of satisfaction with the security situation rose to 91.6% up from 87.55% over four years. The average life expectancy rose from 74.83 years in 2010 to 76.34 years in 2015. Such major achievements mean that after experiencing tribulations and hardships since modern times, China has made a historic leap from standing-up to becoming better-off to getting stronger.

It is fair to say, the CPC has been an inspiring success story of leadership since its founding in 1921 by performance.

Today deep into the hearts and minds of the over 1.3 billion Chinese people, the leadership by the CPC is both the defining feature and the biggest strength of socialism with Chinese characteristics. How can we decode the genes of the success of CPC?

Over the past year, the catchphrase of the Party has been “staying true to our founding mission”, which is to serve the people. Serve the people with heart and soul. This is exactly the core gene of the CPC. The CPC comes from the people, is rooted in the people, and serves the people. When you look through Xinhua Gate at Zhongnanhai, the seat of CPC Central Committee, you cannot miss the eye-catching inscription on the wall, “Serve the people.” People’s Congress, People’s Government, People’s Political Consultative Conference, People’s Court, People’s Procuratorate, People’s Liberation Army……you may have the impression that each and every important institution in China put PEOPLE first in its name. These names did not come by accident. At the Political Bureau meeting of CPC Central Committee in September 1948, one year before the founding of new China, Mao Zedong stressed that the wording PEOPLE should be added to the name of state institutions of new China to mark its difference from old China. The People’s Republic of China replaced the Republic of China on October 1st 1949.

All for the people

As has been the case throughout the Party’s history, its close ties with the people are the embodiment of its nature and purpose, the hallmark that distinguishes the CPC from other political parties, and an important factor enabling the CPC to grow strong. “The people’s wish for a good life is our goal.” Xi Jinping made it very clear at the press conference upon being elected as the General Secretary of the CPC Central Committee on 15 November 2012.

The anti-corruption campaign is a notable case in point. The CPC leadership has repeatedly warned that the biggest threat to the Party is corruption. Five years ago, the new central leadership with Xi Jinping as the core launched a high-profile anti-corruption campaign, which has led to the downfall of a number of high-level officials, known as “tigers,” and lower-level “flies” who serve at the grassroots level. More than 70,000 officials at or above the county-head level, including 41 members or alternate members of the CPC Central Committee, have been investigated for suspected corruption since the 18th CPC National Congress. 1.34 million township-level and 648,000 Party members and officials in rural areas were also punished. China also worked with the international community to hunt corruption suspects who had fled overseas. 3,339 fugitives were captured from more than 90 countries and regions, with 628 of them being former officials. About 9.36 billion yuan (around 468 billion Naira) was recovered. Among the top 100 fugitives listed on Interpol red notices, 47 have been arrested. The campaign has reinforced people’s trust and confidence in the Party.

History serves as a guide for the future. We have every confidence that the 19th CPC National Congress will play an extremely important role in upholding and developing socialism with Chinese characteristics. The CPC will make more determined efforts to accomplish the three historic tasks of advancing modernization drive, reunifying the country, and upholding world peace and common development.

By 2020, China’s GDP and per-capita income will both double that of 2010. A moderately prosperous society in all respects will have been achieved by the centenary of the founding of the CPC.

Addressing the opening session early today, General Secretary Xi Jinping said socialism with Chinese characteristics has crossed the threshold into a new era. He outlined a two-step approach to becoming a great modern socialist country once China’s first centenary goal is achieved. According to him, China’s modernization will be basically realized from 2020 to 2035. From 2035 to the middle of the century, China will become a great socialist country.

CPC benefit for the world

In January 2017, President Xi Jinping proposed building “a community of shared future for mankind” in Geneva. One month later, the concept, together with China’s Belt and Road Initiative, was incorporated into a UN resolution. China and Africa are trustworthy friends and sincere partners. China’s share of African exports jumped from 1.6% in 1995 to 16.5% in 2015 and imports increased from 2.5% to 23.2% over the same period. As President Xi Jinping said in his address at the opening ceremony of the Johnnesburg Summit of Forum on China-Africa Cooperation (FOCAC) in December 2015, “In conducting China’s relations with Africa, we adhere to the principles of sincerity, practical results, affinity and good faith and uphold the values of friendship, justice, and shared interests, and we will work with our African friends to embrace a new era of win-win cooperation and common development.” The upcoming FOCAC meeting next year in Beijing will be the first of its kind after the 19th CPC National Congress. It is our firm belief that the Congress will give a fresh boost to China-Africa cooperation and China-Nigeria strategic partnership.

I thank you for your attention.

Speech of Ambassador Zhou Pingjian of China to Nigeria at the Colloquium on the Global Significance of the 19th CPC National Congress and Its Implications for Africa in Abuja on October 18, 2017 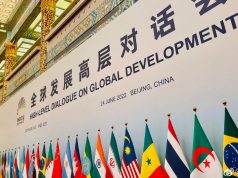 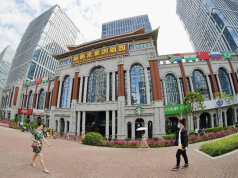 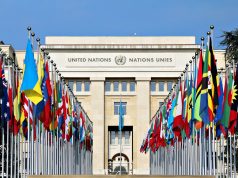