President Emmerson Mnangagwa’s upcoming State visit to the People’s Republic of China will seek to upgrade economic ties with the Asian giant, building on an excellent political relationship.

China stood by Zimbabwe, ostracised by Western funders which fell out with former President Robert Mugabe at the turn of the century, offering stout political support and limited economic succour.

Zimbabwe has, however not explored the relationship to its full economic potential and last month, deputy finance minister Terrence Mukupe revealed that Beijing was unhappy about Harare’s patchy debt repayments.

There is hope, however, that things could change under the business-minded sinophile Mnangagwa’s leadership.

Using reasoning familiar to the Chinese – Deng Xiaoping’s cat’s colour theory – the new president has moved to repeal the local ownership requirement, except for diamond and platinum mining ventures.

As if to strengthen his resolve and as a constant reminder of Deng’s dictum  “It doesn’t matter whether a cat is black or white, as long as it catches mice” , Mnangagwa keeps an artefact bearing Deng’s now fabled cats in his office.

Although China does not offer direct budgetary support, expectations are that it could raise the level of investment in Zimbabwe, which lags behind what the Asian country has committed to other parts of Africa, particularly in infrastructure and energy.

Mnangagwa’s planned visit was confirmed this week by China’s ambassador to Zimbabwe, Huang Ping, when he paid a courtesy call on Energy and Power Development Minister, Simon Khaya Moyo at his offices in Harare.

Ping, who last month handed over US$220 million from Beijing to Harare, suggested Mnangagwa’s meeting with his counterpart, President Xi Jinping, would yield more financial support to Zimbabwe.

“We are enjoying good relations with Zimbabwe,” Ping said. “Soon after smooth transfer of power, China was the first country to send a special envoy to Zimbabwe to congratulate His Excellency (Mnangagwa). The special envoy carried a letter from President Xi Jinping, demonstrating that whatever happened, China was in full support and want to continue to further strengthen the relationship in future. The President has invited His Excellency (Mnangagwa) to visit China. We are happy to see our two leaders meet to map out the blue-print for future development of our two countries.”

TwitterBeijing has also expressed some interest in financing solar power projects in the country.

“We are interested in the solar energy in this country where we want to generate power from new technology,” Ping said, adding: “Zimbabwe has enough sunshine and we think we can make use of this to generate more power to help jump-start this economy. We are looking forward to fund such and more projects to generate power to strengthen our relationship.”

Moyo said: “We have of course entered into a new political dispensation and era and this has not changed the relationship between the People’s Republic of China and Zimbabwe. If anything, it has solidified the relationship.”

After failing to pay international creditors, Zimbabwe has struggled to access funding for its capital-starved economy, mainly due to its inability to service old loans.

Zimbabwe has, however, recently undertaken to implement a US$1,8 billion arrears clearance plan with global lenders. Last year, the country paid off US$110 million to clear its arrears with the International Monetary Fund (IMF).

The plan, which did not enjoy the categorical support of former president Robert Mugabe, had been put on ice, but now appears to have been revived under Mnangagwa and Finance Minister, Patrick Chinamasa’s direction. Under a deal agreed in 2015 in Lima, Peru, Zimbabwe undertook to clear arrears to the IMF (US$110 million), World Bank (US$1,15 billion) and African Development Bank (US$601 million).

After Mnangagwa took over power from long-serving leader, Mugabe, who resigned under pressure from the military and his party — the new administration has inherited an economy in deep trouble.

Zimbabwe has been witnessing a massive rise in prices of all basic consumer goods in recent weeks, a situation which has compounded the misery of crisis-weary Zimbabweans.

This comes as foreign currency shortages persist and suppliers are forced to source the elusive greenback from the black market at high premiums.

The worsening economic conditions have resulted in a significant number of companies closing, rendering thousands of workers jobless. More than 90 percent of the country’s employable people have no formal jobs.

The manufacturing sector, which contributed about 26,9 percent to the economy annually at its peak in 1992, is now a shadow of its former self.

This demonstrates the failure of the cash-strapped government and private sector efforts to arrest de-industrialisation, mainly due to the absence of affordable funding to bailout struggling local companies.

The Confederation of Zimbabwe Industries, in its latest state of the manufacturing sector survey, observed that industries were “under serious threat.” 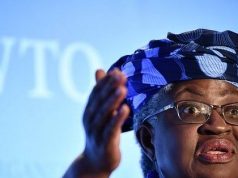 AU congratulates Nigerian Okonjo-Iweala on her selection for WTO DG