Burkina Faso’s resumption of diplomatic ties with China was the right choice, made with the interests of the West African country and its people, a Chinese mainland spokesperson said Wednesday.

“The one-China principle is a universal consensus of the international community,” said An Fengshan, spokesperson for the Taiwan Affairs Office of the State Council, at a press conference.

An stressed that the peaceful development of cross-Strait relations was “the right path to maintain peace, boost common development, and bring more benefits for compatriots on both sides, and the only right choice for the Democratic Progressive Party (DPP) administration.”

He urged the DPP administration to recognize the 1992 Consensus as soon as possible, and recognize that Taiwan and the mainland belong to one China, so that the cross-Strait relations will get back to the right direction of peaceful development, An said.

The government of Burkina Faso now recognizes that there is but one China in the world, that the government of the People’s Republic of China is the sole legal government representing the whole of China, and that Taiwan is an inalienable part of China’s territory.

The African nation announced a decision to sever its “diplomatic” relationship with Taiwan last Thursday. 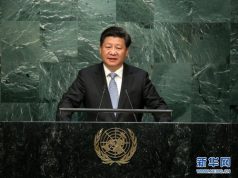