Official Washington was roiled on Tuesday afternoon by competing interpretations of President Donald Trump’s loosely worded agreement with North Korean leader Kim Jong-un, to halt U.S. military exercises in Pyongyang’s backyard.
Speaking to Republican senators at their weekly lunch Tuesday, Vice President Mike Pence reportedly downplayed the president’s startling announcement that the bilateral drills with South Korea would be suspended.
But some senators, like Colorado Republican Cory Gardner, heard in Pence’s words a reassuring commitment that the White House would not abruptly cease its multi-layered military training and preparedness drills in the region. This appeared to contradict the president’s assertion earlier, however, that the United States “will be stopping the war games, which will save us a tremendous amount of money.”
When Gardner told reporters after lunch what Pence had said, the vice president’s office came out swinging, accusing Gardner of recounting a “false” version of Pence’s comments.
But rather than rescind his statement, Gardner instead appeared to double down, tweeting out that Pence “was very clear: regular readiness training and training exchanges will continue.”
Which prompted the vice president’s spokeswoman, Alyssa Farah to release similar tweets, pushing back on Gardner.
At the root of the misunderstanding were the president’s own comments, which were vague as to what exactly he meant by “war games.” What’s more, a document signed by both Trump and Kim did little to help clarify what Trump was committing to do.
And throughout the summit, Trump emphasized the emotional rapport he felt had with Kim, and avoided questions about the specifics of what either country was actually agreeing to do.
“I think our whole relationship with North Korea and the Korean peninsula is going to be a very much different situation than it has in the past. We both want to do something, we both are going to do something, and we have developed a very special bond,” Trump said at the signing ceremony for the document. “This is going to lead to more and more and more.”
Meanwhile, Trump, who called the military exercises “provocative” and “tremendously expensive,” falls out of step with the Pentagon which has maintained that the joint exercises are routine, purely defensive and vital to maintaining readiness on the Korean Peninsula.

Earlier this year, North Korea threatened to withdraw from the Singapore summit while the U.S. was conducting a training exercise with South Korean troops.
“The scope of our exercises has not changed,” Pentagon spokeswoman Dana White said at the time, adding that the annual drills are “longstanding and defensive in nature.”
“These are alliance decisions, this is something that we do to ensure the readiness of both our forces as well as the South Korean forces,” White said, noting that the training will continue despite the planned talks with North Korea.
The North, however, consistently calls the military drills between the U.S. and South Korea a “provocation” and a test run for a future invasion.
Trump also singled out the U.S. Air Force bombers that conduct training missions in the region.
“We fly in bombers from Guam. I said when I first started I said where do the bombers come from? Guam. Nearby. I said ‘oh great, nearby, where is nearby?’ Six and a half hours. Six and a half hours. That’s a long time for these big massive planes to be flying to South Korea to practice and then drop bombs all over the place and then go back to Guam,” Trump said.
For the last 14 years, the U.S. Air Force’s B-1B Lancer, B-52 Stratofortress and B-2 Spirit bombers have continuously rotated through Guam in an effort to show American commitment to allies in the region.
Trump says the bomber flights are “very expensive.”
According to estimates that the U.S. Air Force provided CNBC, the B-2 has an operational flight cost of $130,000 an hour and the B-1B operates at $95,000 an hour.
As of yet, the Pentagon has not updated guidance for U.S. troops slated to participate in the bilateral Ulchi Freedom Guardian exercises later this year. Ulchi Freedom Guardian, one of the largest military exercises in the world, ran for 11 days last year and involved 17,500 Americans and 50,000 South Korean troops.
Currently, the U.S. maintains 28,000 troops in South Korea. 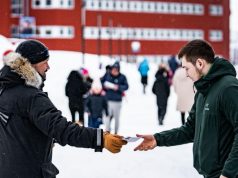