Wang, who is the chairman of the National Committee of the Chinese People’s Political Consultative Conference (CPPCC), visited the Nairobi Terminus of the Standard Gauge Railway (SGR) connecting Kenya’s port city of Mombasa and the capital Nairobi. He also took a 30-minute round-trip train ride between Nairobi and Athi River.

The top Chinese political advisor is currently on a 10-day African tour, which has taken him to the Republic of Congo and Uganda.

Wang went into the dispatching center of the Nairobi Terminus and talked with employees from both China and Kenya at the station and on the train.

He said the fast completion of the SGR construction and the following good operation showed the high level of cooperation between China and Kenya.

The project also represents a milestone that Kenya’s national infrastructure has been lifted to a higher level, he added.

China has always encouraged enterprises to understand their African partners and cooperate with them on an equal footing, he said.

The Belt-and-Road Initiative proposed by Chinese President Xi Jinping has brought China’s railway technologies to East Africa, said Wang, adding that China will further step up the level of technology transfer and personnel training so as to lay a sound foundation for the independent operation of the SGR by Kenya in the future.

Proposed in 2013, the Belt and Road Initiative aims to build a trade and infrastructure network connecting Asia with Europe and Africa along the ancient Silk Road routes. It comprises the Silk Road Economic Belt and the 21st Century Maritime Silk Road.

Wang called on both sides to work together to enhance mutually beneficial cooperation and build a bright future for China-Kenya ties.

Kenya’s Cabinet Secretary for Transport and Infrastructure Development James Macharia and Raphael Tuju, secretary-general of the ruling Jubilee Party of Kenya and cabinet secretary without portfolio accompanied Wang on the visit.

The 472-km SGR launched commuter train service on May 31, 2017. Dubbed “Madaraka Express,” the SGR commuter train has so far ferried an estimated 1.4 million passengers while stimulating commerce along its corridor. Madaraka is a Swahili word, meaning responsibility, power and governance.

The train has attained an occupancy rate of over 95 percent while reducing the travel time between Kenya’s two biggest cities by half, from 10 hours to five.

The China-funded modern railway is estimated to have boosted the African country’s GDP by 1.5 percent and have provided nearly 50,000 jobs to locals, according to official figures. 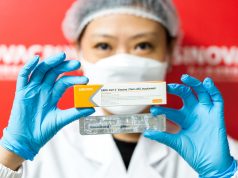 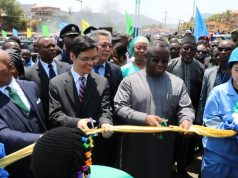 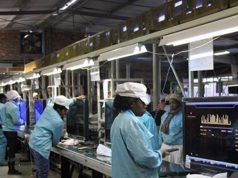