During a ceremony at the harbor, representatives from the public and private sectors on both sides, including Papua New Guinea’s Defense Force Chief of Staff Captain Philip Polewara and defense personnel, the Chinese embassy, Chinese-funded enterprises, overseas Chinese community and local residents, bid farewell to the ship as it embarked on the next leg of its mission.

In the past week, Ark Peace provided more than 6,200 medical consultations, treatments and services, including surgical operations and inpatient work.

The ship’s crew and specialist teams also carried out medical exchanges and services at local hospitals. On Tuesday, its Chinese medical staff held a major joint emergency rescue drill with their Papua New Guinea counterparts, marking a high point in the mission.

During a visit to the Chinese ship, Papua New Guinea’s Prime Minister Peter O’Neill had highly commended its second trip to the country in four years and its provision of valuable medical services to local residents. The trip has further enhanced the friendship between the two peoples and deepened the countries’ strategic partnership, he said.

More than 400 local government and military representatives toured the ship and further expressed their deep appreciation for its contributions.

During its stay, the Ark Peace also hosted a deck reception to showcase Chinese tradition and culture to its hosts. A cultural entertainment group from the ship performed at the local national defense force’s children’s school and football matches were held.

The activities received wide coverage from local media, which also praised the ship’s message of peace and friendship that have helped enhance bilateral ties and improved people’s lives.

The Ark Peace heads to Vanuatu next as part of its Mission Harmony 2018. Since 2008, it has visited 37 countries and provided free medical services for more than 180,000 people. 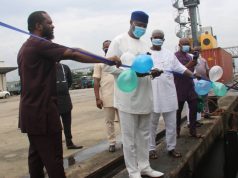