After a technical review of its light rail (blue line) project, the Lagos State Government yesterday disclosed that it had signed a memorandum of understanding (MoU) with a French multinational, Alstom SA to complete the rail project.

The state government, thus, said the passenger operation of the first phase (Marina to Mile 2) of the 27-kilometre project might take off in 2022 with the MoU it just signed with Alstom, a firm with 100 years of railway experience covering 60 countries.

This was contained in a statement the Managing Director of Lagos Metropolitan Area Transport Authority (LAMATA), Mr. Abiodun Dabiri issued yesterday, noting that the MoU was sealed after a comprehensive review of the rail project.

The state’s first civilian governor, Alhaji Lateef Jakande had in 1983 conceived Lagos Metroline Network. After military takeover on December 31, the project was scrapped in 1985 by the military administration of Maj. Gen. Muhammadu Buhari (rtd) at a loss of over $78 million.

The rail project was revived under the administration of former Governor Bola Ahmed Tinubu with a formal announcement of its construction in December 2003, but could not kick-start its implementation due to paucity of funds.

Under the administration of former Governor Babatunde Fashola, the cost of the rail project was reviewed from $135 million in 2003 to $1.25 billion in 2010. Subsequently, its implementation took off, but was later halted due to economic recession.

However, a major relief came about six weeks ago when the French Government announced a plan to support the state’s public transportation system and megacity agenda with €200 million (83.7 billion) at the French-Nigeria Business Forum.

In his statement yesterday, Dabiri said the partnership between the state government and Alstom SA indeed demonstrated Ambode’s commitment to the transformation of public transportation in the state.

He explained that the state government had engaged a consortium of experts to undertake a technical due diligence on the Lagos Rail Mass Transit (LRMT), especially the first phase which run from Marina to Mile 2.

He noted that the consortium had developed a roadmap, which the state government eventually accepted “to bring the railway project to passenger operations”.

Dabiri said the consortium outlined their findings and proposed a roadmap “to complete the civil infrastructure works and the operation & maintenance (O&M) infrastructure that will be needed for the of passenger operation to take off.

“Based on its final report, the consortium of Alstom Transport SA France has been engaged for the procurement, engineering, construction, installation of operation & maintenance moveable infrastructure and commissioning of railway systems towards the commencement of passenger operations for LRMT Blue Line project from Marina to Mile 2.”

While highlighting the extent of works to be carried out by Alstom SA, Dabiri said for ease of implementation, the work plan had been divided into two phases, with phase one aimed at demonstrating the non-public operation of the existing rolling stock before end of second quarter of 2019.

“For this purpose, a track length of about 3.0 km from Iganmu Station to National Theatre will be electrified. This operation would be done with the rolling stocks already supplied for the Blue Line project.
“This phase would allow the completion of all the preliminary works that would lead to the financing of the main works in Phase two. Phase one will be fully financed by Lagos State Government through Internally Generated Revenue (IGR).

“Phase two, which is expected to be completed in 39 months, would entail the provision and installation of railway operations’ systems for the project from Marina to Mile 2 and the delivery of a passenger-ready Lagos Blue Rail Line by 2022.”

After signing the agreement, a Director of Alstom SA, Mr. Guy Jean-Pierre, commended the state government for the confidence reposed in the firm and the opportunity given to partner with the state on the Blue Line Rail project.

He assured that Alstom would work to ensure the delivery of the Blue Line to passenger operation by bringing on board required expertise and experience in rail system management.

Senior Vice President Middle East and Africa, Mr. Didier Pfleger said Alstom would be proud to participate for the first time with the Lagos local authorities and Lagos Metropolitan Area Transport Authority to the achievement of this important milestone for the city, building on our experience as a global leader in metro projects.

Pfleger said equipped with proven reliable and ecological solutions, the blue line would contribute to positioning the city among the showcases of sustainable mobility in Africa. 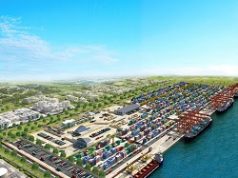 Construction to commence at Ibom Deep Seaport in 2022