The Minister of Information and Culture, Alhaji Lai Mohammed, at the Chatham House in London on Wednesday, spoke on Nigeria’s security and the 2019 general election.

His speech was on the topic “Nigeria’s National Unity: Toward Participation and Shared Values”.

Mohammed noted that in the next few months, Nigeria will be returning to the polls for the general elections.

He said: “The run-up to the 2015 general elections tested the nation’s unity, in no small measure, and it remains to be seen whether we, the people, have learnt any lessons as we move closer to the 2019 polls.

“The insurgency that started in 2009 had taken its toll on the country by the time we assumed office. The terrorists struck freely at places and times of their own choosing. They strolled into Abuja, the nation’s capital, several times to wreak havoc, including on the United Nations office and the police headquarters.

“The terrorists administered a territory the size of Lebanon, collecting taxes and removing and installing Emirs. Nigerians slept with one eye open. It was in the midst of this that the new Administration of President Muhammadu Buhari came into office.

“The President ordered the relocation of the military campaign against the insurgents to the North-east, and rallied regional and international support for the battle. Shortly thereafter, the insurgents were dislodged from the territories they occupied, and they lost their capacity to freely attack cities or seize territories.

“Since coming into office, the Administration of President Muhammadu Buhari has embarked on an unprecedented renewal of the nation’s infrastructure, investing an unprecedented 2.7 trillion Naira on roads, rails, power and other similar projects.

“Distinguished ladies and gentlemen, as you are all aware, some 276 girls were abducted by terrorists from their school in Chibok, Borno State, in 2014, about a year before the Buhari Administration assumed office.

“At his inauguration, President Buhari promised to do whatever is necessary to secure the release of the girls. Today, many of the girls have been freed unharmed, even though over 100 of the girls remained in captivity.

“When some 110 Dapchi school girls were similarly abducted, on 18 Feb. 2019, weensured that Nigerians were provided with detailed and up-to-date information, having led a number of Federal Government delegations to the school to get first-hand information. When, a few weeks later, most of the girls were released, Nigerians were never in doubt about the efforts that the government had put into freeing the girls.

“Unfortunately, two of the three aid workers have now been killed, the latest one being killed this past Monday. Our thoughts and prayers go out to the families of the murdered women, even as we continue to do everything any responsible government will do to free the women who remain in captivity.

“As the 2019 general elections approach, Nigeria faces a new challenge, a threat not just to the country peace and security, but indeed its very existence. It is the dual challenge of fake news and hate speech. Yes, the fake news problem is not unique to Nigeria, but it poses a more potent threat to the country because of its multi-ethnic, multi-religious and multi-cultural status.

“It is also a clear and present danger to the nation’s unity. Naysayers have latched onto the fake news phenomenon to exploit the country’s fault lines and inflame passion.

“Pictures of gun-totting herdsmen from other lands are routinely used to depict the herdsmen in Nigeria. Age-long clashes between Farmers and Herders have suddenly been dressed in the garb of religion and ethnicity.

“Ignored is the fact that the clashes have become more persistent because of a mixture of many factors, including population explosion, effects of climate change, keener contest for dwindling natural resources and sheer criminality. Religion and ethnicity are not the reasons for these clashes.” 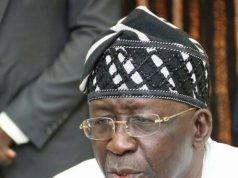