It will be eight times brighter than the real moon, and cast a ‘dusk-like glow’

A city in China is planning to launch an ‘artificial moon’ that will light up the skies as far as 50 miles around.

The so-called illumination satellite set to deploy over the southwestern city of Chengdu in 2020 is touted to be eight times as bright as the real moon, to cast a ‘dusk-like glow’ over the region, according to the People’s Daily.

Officials have released few details on the project, but say the idea pulls inspiration from a French artist who envisioned a necklace of mirrors hanging over Earth.

It will complement the moon to make Chengu’s night skies brighter when it launches in 2020, potentially serving as a replacement to conventional streetlights.

The artificial moon can be controlled to light up an area between 10 and 80 kilometers wide (6 to 50 miles).

While it might sound implausible, Wu says the technology has been in the works for years and has now ‘matured’ toward readiness.

Whether the plan will ultimately come to fruition, however, remains to be seen.

Chengdu’s artificial moon has already been met with criticism from skeptics and concerned citizens who argue that the light will have adverse effects on animals and astronomical observation, People’s Daily points out.

But according to Kang Weimin, director of the Institute of Optics, School of Aerospace, Harbin Institute of Technology, the light will amount only to a ‘dusk-like glow.’

It’s not the first time humans have attempted to launch a light-reflecting object into the sky – but in the past, such plans have largely ended in failure.

Last year, for example, a Russian team attempted to deploy what was touted to become ‘the brightest object in the night sky, after the moon.’

The Mayak satellite launched from Baikonur spaceport on July 14, 2017 aboard a Soyuz 2.1a rocket despite backlash, particularly from astronomers who noted the importance of keeping the night skies dark.

In the weeks after launch, amateur astronomers and scientists tracking its journey spotted what they believed to be the spacecraft.

But in August of that year, the team behind the project revealed the solar reflector failed to unfurl in orbit. 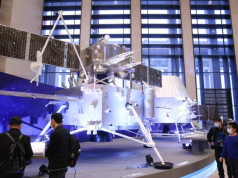