Group Managing Director of the Nigerian National Petroleum Corporation (NNPC), Dr. Maikanti Baru, stated that NNPC executed a contract with a private firm for the activation of a virtual gas pipeline network for power generation to optimize the nation’s vast gas resources. The project, which will be facilitated through the installation of mini-liquid natural gas plants, is designed to supply about 84 million standard cubic feet of gas per day by transporting gas from production fields using customized cryogenic tankers to areas that are not easily accessible through pipelines.

Dr. Baru further stated that the innovative gas supply technique would also further develop Nigeria’s energy sector, and, consequently help revitalize other sectors. Dr. Baru said the corporation had made massive investments in the promotion of the usage of cooking gas, with the revamp of the 8 liquefied petroleum gas butanization plants in Apapa, Ibadan, Oshogbo, Enugu, Ilorin, Gombe, Makurdi and Kano.

The Minister of State for Petroleum Resources, Dr. Ibe Kachikwu, disclosed that the crude oil production exemption granted to Nigeria in 2016 by member countries of the Organisation of Petroleum Exporting Countries (OPEC) and non-OPEC members, including Russia, helped raise Nigeria’s foreign exchange reserves to $45 billion from $25 billion. According to Kachikwu, Nigeria’s request for a production cap exemption during the negotiations ensured the West African country was able to produce and sell more oil, which resulted in about $2 billion in addition to Nigeria’s foreign exchange reserves. Additionally, Kachikwu stated at the Nigerian Gas Association’s 11th International Conference and Exhibition that the federal government is considering alternative sources of gas supply, and is looking beyond the Nigerian Delta region. Kachikwu reiterated the federal government’s seriousness about taking gas to the northern region of the country through the Ajaokuta-Kaduna-Kano gas pipeline, so as to address the massive deindustrialization, deforestation, growing population and economic challenges witnessed in the region.

On Monday, Ghana officially launched its first oil and gas licensing round. The licensing round forms part of government’s manifesto to ensure transparency in the country’s oil and gas sector. Speaking at the launch of the oil and gas licensing round in Accra, President Nana Akufo-Addo said that his administration had implemented several measures over the last year to improve the exploration of oil and gas, and increase oil revenue for the state. He added that government was working to examine the current state of the industry to make sufficient changes that would be beneficial to sector development. Ghana currently produces 200,000 barrels per day (bpd) which is led by the Jubilee field, which contributes 100,000 bpd.

On 18 October, oil prices continued to trade lower after data showed an unexpectedly strong build in U.S. crude stockpiles, while geopolitical tensions, the upcoming deadline for U.S. sanctions on Iran and continuing concern over production, have all been factors involved in recent market volatility. The U.S. West Texas Intermediate crude futures fell 56c at $69.19 a barrel at 10:24 AM ET (14:24 GMT), while Brent crude futures traded down 71c at $79.34.

The U.S. Energy Information Administration weekly report for 17 October showed a rise in crude oil inventories by 6.5 million in the week ending 12 October, the fourth straight weekly build and almost triple what analysts had forecast. The increase in inventories offset a slip in U.S. crude production of 300,000 bpd to 10.9 million bpd over the same period, after some of the offshore facilities were shut down for Hurricane Michael.

Crude bumped higher this year as uncertainties persisted over whether OPEC and its partners can offset potential supply losses from U.S. sanctions on Iran that kick in early next month. The gains were further supported by the escalating U.S.-Saudi tensions after U.S. President Donald Trump pledged ‘severe punishment’ should Saudi Arabia be linked to deceased journalist Jamal Khashoggi’s disappearance. 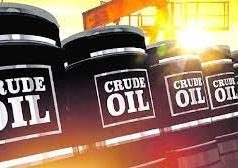