The Ebonyi State APC gubernatorial candidate for the March 2 election, Senator Sonni Ogbuoji has raised an alarm that the government of David Umahi in the state is executing a compulsory mandate to teachers in Abakaliki and the entire state to submit their PVCs or forfeit their January salary.

This development is a confirmed move by the state government to bully and manacle the teachers and force them to vote the incumbent governor.

When this issue broke, the media office of the Ogbuoji Campaign Organization made calls and without disclosing identity to some eight teachers from different primary schools in Abakaliki who confirmed this.

Reacting to this, Ogbuoji alerted the Nigeria Police, the DSS, INEC and the Nigeria Union of Teachers in the state about the development

The teachers said the ultimatum had January 18 as last date of submission and later shifted to January 21, Monday.

The teachers who spoke and pleaded that their identities would not be disclosed in order not to endanger their jobs lamented that it was the suspicion of some of them that doing that would mortgage their conscience in freely voting a candidate of their choice that delayed it ending on Friday.

One of them, a lady teacher from Onicha LGA said; ‘it is not a secret. We have been under pressure to submit photocopies of our PVCs and the threat is that if we don’t, we won’t receive our January salary. We were mandated to submit photocopies of the PVCs to the head teachers who would send the list and copies to the education secretary of Abakaliki. Because of the refusal and delay of some of us, they extended the last date of submission to Monday. As I speak to you, so many have already done that. Only the minority like us that have resisted by refusing to submit still hold the submission to the secretary. In fact, some of us requested a memo that gave the directive which the headmistress said none was given her, it was a verbal order from the office and we must comply,’

Also, another call to two secondary school teachers in the same city corroborated the same order.

The secondary school teachers said they were issued forms to fill their PVCs numbers by the state education ministry.

‘In the form, we are to fill our names, our local governments of origin, the ward we registered and the polling unit we would cast our ballots.

‘Some of us tried asking the reason for the order and were not told, and rather given a last date to do that or face punishment for failure.’

In fact, two teachers at the Army Day Secondary School, Abakaliki confirmed they submitted theirs at the end of November last year and that every teacher had done that.

‘The dilemma we face is what may become of us if we refuse, that is why some of us decided to raise our voice before we are punished unjustly.’

Asked if the teachers like him that refused the order have complained to the state Nigerian Union of Teachers, NUT, he said they didn’t ‘because they don’t hope to get any positive response.’

In fact, further inquiries showed that about 90 percent of the secondary schools in Abakaliki have already submitted.

A call to Edda, Afikpo South, confirmed from teachers that the PDP sent some officials of the party that have been going round compiling such list which would be brought to them for confirmation and addition of their PVCs any moment from Monday. January 21.

We later visited the Girl’s High School, Abakaliki and spoke with two teachers who told us that all the teachers had already submitted their particulars and will be in school, Saturday, January 19 to submit the photocopies of their PVCs.

Also, when we called a head teacher in a school in Ivo LGA, he confirmed that he and other head teachers and principals had submitted the same PVC photocopies since end of last year. He also added that ‘that is not the only development. During the voters registration, the state officials in connivance with INEC came to schools and registered senior secondary school children of voting age and took away their PVCs when they were issued.

Wondering why the government of Umahi embarked on such desperate act, Ogbuoji asked why the same candidate who had at different occasions dared the teachers and civil servants of the state he had trampled on their rights as slaves to go to hell with their votes as inconsequential voters that won’t stop his victory, would be the ones coerced now to do this.

‘If Umahi needed the votes and support of the teachers, why then did he so maltreat them in the past four years and snubbed their cries for a better deal. Or should we conclude that he deliberately impoverished them with meager salaries to make them badly hungry and pliable at a time like this. 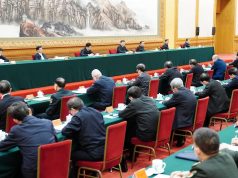 As COVID-19 spread declines, Xi addresses China, urges them not to relent till final victory 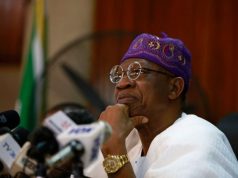 Nigerian govt says it had no warning of US travel ban 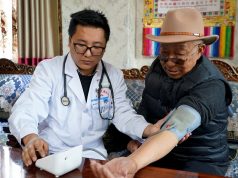 Richer Chinese regions reach out to Tibet for medical assistance