In order to dispel all the lies peddled by the political clan of Governor David Umahi and his campaign organization, we state that there was no attack on the governor when he visited Edda for his campaign.

If there was an attack, we need the peddlers of these lies to say specifically where in Edda the attacks took place and show the world the video of the incident and those arrested.

For the records, there was some skirmishes in Ebunwana Edda early hours of Thursday, as early as 6.am and the police had reached there at the instance of the state government of Ebonyi to selectively arrest the youths of the town that came out to resist that Umahi’s posters and billboards be put up to replace those of Senator Sonni Ogbuoji, the APC gubernatorial candidate, that had been damaged at night at the behest of the coordinator of the development centre.

Because of the destruction carried out at night, the people woke up and resisted further damage and replacement with campaign signage of Umahi in their village.

And for the records also, Governor Umahi went to Nguzu Edda through the Owutu-Etiti Edda road and never through Ebunwana where the little misunderstanding had been quelled.  Again, Umahi came to Edda after midday and none of the creators of these baseless lies can point at a place the said attack took place.

Also late in the night before Umahi came, the local government council had also mobilized thugs to destroy Ogbuoji’s campaign signage at Nguzu. And from facts we have, the move was deliberate to ridicule the APC candidate in his own hometown by few people from Edda who have lost their minds to die for a man from another land against their own brother. We don’t even blame the government for these lies. We rather blame Edda PDP supporters who seem to have lost it for personal gains, sponsoring that Ogbuoji’s campaign signs shouldn’t be seen in his hometown when there is no such thing against Umahi in his own hometown

Apart from the callous ways of treating the opposition in the state, there is no way a government or party will be out to tell such bare faced lies.

It is also on record that Umahi came to Edda in armoured cars and nobody among sane youths that don’t have even a catapult would have dared the retinue of security around the governor.

In Nguzu Edda during the rally, there was no form of altercation with anybody or by anybody.

The tissue of lies weaved here are to hide the truth that PDP held Isu, Onicha LGA down with thugs who shot well into early morning of February 7to stop the planned APC rally there.

A good case was the brutalized member of APC in Onicha, Hyacinth Arisi, an executive of the APC from the Amanator Ward

He was beaten up on his way to the rally and his motorcycle destroyed, which a video of the man narrating his ordeal went viral on Facebook the same day

The APC rally in Okposi, Ohaozara, which is Umahi’s LGA was on the same Thursday he was in Edda, and was disrupted by PDP hired muscles and these were reported to the police.

We also know that what brought about these lies was the Ebonyi APC’s loud commentary exposing the brutality of the state government against opposition which was the news issue on Radio Nigeria network news all through Friday, February 8.

They hurried home towards evening of the same day after sending a wishy-washy piece to Radio Nigeria to whittle down the impact of our commentary that sent their blood pressure running out of control, and later came up with these lies.

Even a night before the Ogbuoji’s campaign in Onicha and Ohaozara, the Ebonyi state radio had aired repeated announcements that the opposition’s rallies would never be allowed to hold at any public place like schools in the council and warned that any school boss that flouted the rule would be sacked.

We have already beforehand made the world know of the gross intolerance of the state government against the position and the APC in particular before the feeble lies came from them. 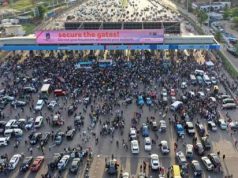