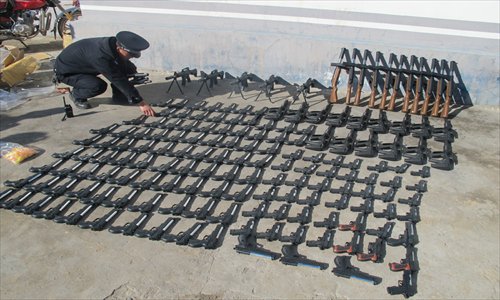 At a meeting held in Beijing Wednesday, the Ministry of Public Security announced a roll-out of a 100-day unified action to crush and confiscate illegal guns and explosives across the country from late April to the end of July, the Beijing News reported.

“This campaign coordinates the central government’s action to clean up gang crimes launched in 2018 to create a safe and stable social environment for the 70th anniversary of the founding of the People’s Republic of China,” Chen Tao, a lawyer at the Beijing-based Junyong Law Firm, told the Global Times on Thursday.

Since the crime crackdown campaign was initiated on January 24, 2018, China had seen a decrease of 27.6 percent and 29.1 percent in criminal cases of gun use and explosions by November 2018, compared with the previous year, according to the Xinhua News Agency.

China has solved nearly 2,000 cases involving guns and explosives, dismantling more than 50 gangs so far this year, according to the report.

More than 2,300 criminal suspects were arrested and about 25,000 pieces of information relating to illegal guns and explosives had been removed online, the report said.

Sun Lijun, deputy head of the Ministry of Public Security who called the Wednesday meeting, said China needs to improve and perfect the mechanism to fight crimes and reward those who report on criminal activities, motivating people to participate in the campaign.

It is also important to strengthen the application of technology during the process, Sun noted at the meeting.

Xu Xin, a professor at the Beijing Institute of Technology’s School of Law, pointed out that a bottleneck in the current campaign is how to classify the guns police seized in specific cases, which is an important basis for how people convicted of gun offenses are sentenced.

Xu referred to some cases in recent years where suspects were heavily punished for possessing toy guns, which triggered heated discussions on social media.

A court in Southeast China’s Fujian Province reduced the sentence of a man named Liu Dawei from life to seven years and three months in prison and a fine of 32,000 yuan ($4,653). Liu was charged with smuggling 24 replica guns he had purchased online.

Private gun ownership is prohibited in China. Those caught smuggling more than 10 guns that use compressed gas can be sentenced to life in prison or even death.

Liu’s sentence was reduced because he was never in possession of the guns he purchased. The court also found the confiscated guns he purchased were not as deadly as previously ruled and they had not caused any harm.

It was also noted there was a lack of hard evidence suggesting that Liu would have used the guns for illegal purposes.