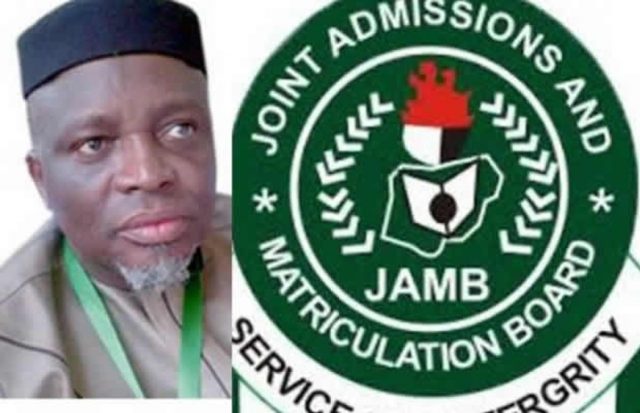 The candidate that emerged highest scorer in the 2019 Unified Tertiary Matriculation Examination, UTME, of the Joint Admissions and Matriculation Board, JAMB, released Saturday is Ekene Franklin, a 15-year-old Abia State native.

However, in spite of his outstanding score of a breathtaking 347 marks, the best in the list of over 1.88m candidates, Ekene is under-aged and can’t be admitted into the federal university he applied to.

It was the Registrar of JAMB, Professor Ishaq Oloyode, who announced that the best candidate may not be admitted in the University of Lagos, which he chose as his first choice because of age.

Oloyede in his speech to announce the release of the results noted that the examinations were fraught with serious irregularities and manipulation from especially the CBT exam centres and owners.

He lamented that; ‘In Nigeria too, examination malpractice is exacerbated by the insatiable greed and desperate antics of parents who are hell-bent on inducting their innocent and not-so-innocent children into the world of sharp practices and corruption. Yet, the given circumstances made it difficult for us in 2017 to adopt the international best practice of pre-release clinical scrutiny of the results of the the examination of this nature especially when one is aware of how endemic the rot had been since the period of the Paper and Pencil Test till the recently introduced CBT.’

He further narrated that; ‘The foundation of examination malpractice is laid at the point of registration with the active connivance of some CBT centre owners who allowed themselves to be infiltrated by those who parade themselves as owners of tutorial classes. Unfortunately, some elite institutions that charge exorbitant fees, which they hadmade the parents part with in the name of secondary education, became active in the procurement of ‘best results’ for their students at all costs. These characters have permeated the system such that it is Herculean to confront and dislodge them. When one of the examination bodies recently decided that one category of teachers would not supervise its public examinations, all hell was let loose. However, the truth of the matter is that the body is correct in its resolve.

There are many ways of multiple registration. While the rich procure graduates and senior undergraduates to write examinations in the name of their pampered children who will then use the highest score to obtain admission to some institutions of choice, the not-too-rich do multiple registrations by simply re-arranging their names, then claim the highest of the scores obtained. The extent of this infraction is appreciated through the huge amount of money JAMB makes from the correction of names , dates of birth by the perpetrators.’

The JAMB also in an attempt to arrest this bad development delisted about 116 CBT Centres nationwide from conducting the UTME tests in future.