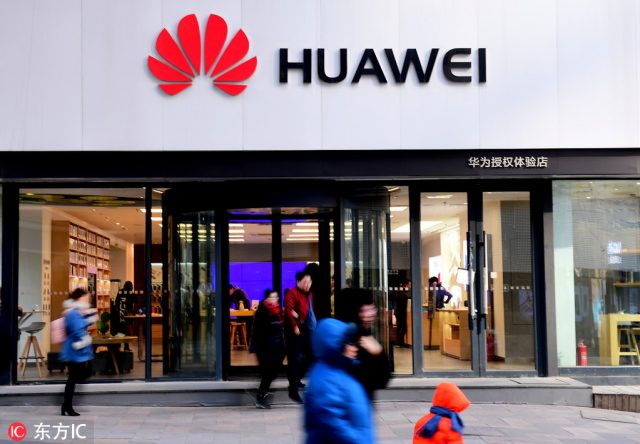 Earlier this week, Huawei was added to the U.S. Bureau of Industry and Security’s so-called Entity List. That means American firms will need to get a license from the government to sell or transfer technology to Huawei.

Huawei has over 30 U.S. companies that it deems “core suppliers,” selling it components to go in everything from its smartphones to its telecom networking equipment.

Many of those firms are publicly listed and took a battering by the close of U.S. trade on Thursday. Qualcomm was down 4%, Micron was nearly 3% lower, and semiconductor firms Qorvo and Skyworks were down 7% and 6%, respectively.

CNBC reached out to all four of those companies for comment about Huawei’s inclusion on the Entity List. None have replied.

Huawei, for its part, said the U.S. government’s move could meaningfully hurt such American firms.

“This decision is in no one’s interest. It will do significant economic harm to the American companies with which Huawei does business, affect tens of thousands of American jobs, and disrupt the current collaboration and mutual trust that exist on the global supply chain,” a Huawei spokesperson said on Friday.

“Huawei will seek remedies immediately and find a resolution to this matter. We will also proactively endeavor to mitigate the impacts of this incident.”

It appeared that Huawei has been preparing for this situation for some time. The world’s largest telecom equipment maker told some suppliers six months ago that it wanted to build up a year’s worth of crucial components to prepare for any U.S.-China trade war-related issues, according to a report from the Nikkei Asian Review on Friday.

Over the past few years, Huawei has also been trying to reduce its reliance on U.S. companies by investing in its own chip technology for consumer products, particularly smartphone processors and 5G chips. 5G refers to the next generation of mobile networks which promises super-fast speeds and the ability to support new technologies like driverless cars.

He Tingbo, president of Huawei chip division Hi-Silicon, called the American decision to put it on the Entity List “insane” in a letter to employees translated by CNBC. She said the company has been preparing for it for several years, and that Huawei has been creating “spare tires” — apparently referring to extra components that would allow the company to survive if the U.S. cut off the fresh supply.

“All the ‘spare tires’ we’ve created are no longer spare,” He said in the letter.

The stockpiling along with the development of its own chip technology could help Huawei weather the storm in the near term, experts said.

“While it could hit Huawei quite a bit, it will also hit these companies as Huawei has grown big enough to be substantial portion of these companies’ revenues,” Neil Shah, a research director at Counterpoint Research told CNBC.

“Huawei has … started to stock enough components for next 8-12 months so ideally should be little affected in the near term. Huawei would be expecting to get this resolved by then but there will always be a hanging sword,” Shah added.

Stockpiles may not be enough

While Huawei has been investing in some components, there are other parts that make up a smartphone for which it doesn’t have its own technology and for which it heavily relies on American parts.

“So yes, they have some internal (parts), but they’re missing a large portion of what they need to do the most advanced stuff, and there’s no way around buying American for that,” he added.

The analyst said that Huawei’s smartphone business, which has helped drive the consumer division to be the company’s biggest by revenues, could “suffer.”

“Huawei’s phone business is going to suffer, in my opinion, significantly from this, and that means they’re going to lose shares. Well someone’s going to sell those phones, and it won’t be ZTE, because they don’t have much of a phone business at all. It’ll probably be Samsung, and maybe perhaps other (original equipment manufacturers) like Oppo, Vivo, Xiaomi who do buy a lot of Qualcomm, ” Snyder said.

Corning, a maker of specialist glass, said it will continue to comply with trade regulations.

“Corning’s optical communications business segment has a large global customer base. We are confident that our optical communications business segment will remain on track to deliver on its goal of $5 billion in 2020 sales, with continued growth beyond,” a spokesperson told CNBC. “We do not believe that this issue will have a material impact on Corning’s overall financial performance.”

A spokesperson for Flex, a U.S.-listed design and manufacturing company, said it is “monitoring the situation closely and reviewing” the Entity List to determine the impact on its business.

Several other companies have not replied to CNBC’s request for comment.

A concern is that there could be some retaliation from the Chinese government to suppliers with exposure to China, such as Qualcomm. But analysts said they are not worried about that yet.