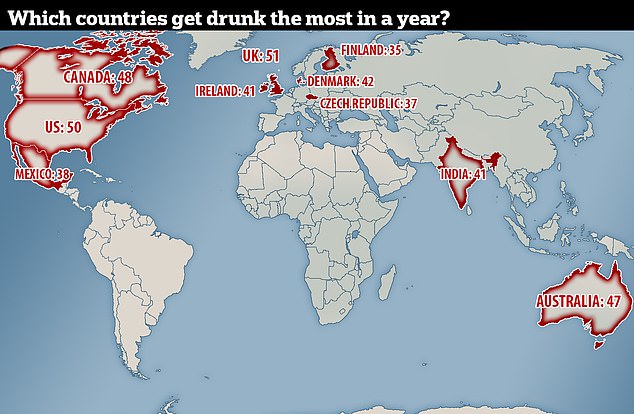 Adults in the UK get drunk more often than anywhere else in the world, rankings show.

Britons reported getting intoxicated an average of 51.1 times in a 12-month period, almost once a week.

In comparison, the global average is just 33, according to an analysis of data from people living in 36 countries.

English-speaking countries led the way for how often people get drunk, with the US, Canada and Australia closely following the UK.

The findings come from the eight annual Global Drugs Survey, thought to be the largest poll on substance use in the world.

Critics say the findings dispute a major study last week which showed Britons are drinking less alcohol than they did ten years ago.

Experts believe this is being driven by young people, the ‘millennial’ generation, who tend to be far more restrained in their drinking habits than older groups.

Researchers based in London surveyed 5,400 people from England, Scotland, Wales and Northern Ireland and more than 120,000 globally.

Professor Adam Winstock, founder of the Global Drugs Survey, said while fewer people were drinking, many who were are doing so in a potentially harmful way.

He added: ‘We get told too much is bad, and it is, but current guidelines fail to accept the pleasure of intoxication and give little guide on difference between being a little drunk and a lot drunk, and doing it three-four times a year versus weekly. We need to have that conversation.

‘In the UK we don’t tend to do moderation, we end up getting drunk as the point of the evening.

‘Until culture changes and we become more European and moderate in our drinking, we might have to bite the bullet and think about how to advise people to get drunk drinking less.

‘Getting drunk carries risks of injury and health harm, but we need to start highlighting the risks at different levels of drinking even if they are above safe limits.’

The survey found the UK is second behind Australia in how many people sought emergency treatment following alcohol use in the last 12 months – 3.7 per cent of respondents.

UK drinkers regretted just under a fifth (18.5 per cent) of their drinking sessions, compared to 20 per cent globally.