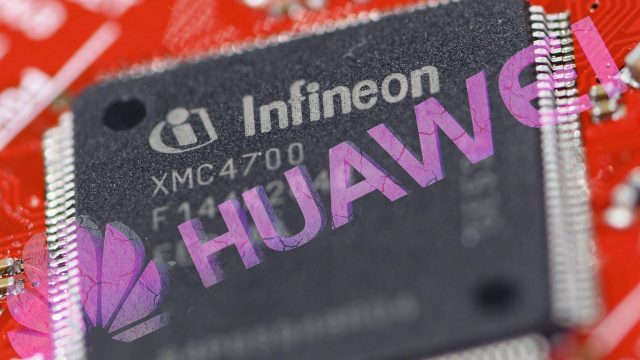 German chipmaker Infineon Technologies has suspended shipments to Huawei Technology, two people familiar with the matter told the Nikkei Asian Review, in the first sign that Washington’s crackdown on the Chinese tech giant is beginning to choke off vital chip supplies beyond the U.S.

Infineon’s decision to stop deliveries came after the U.S. Department of Commerce last week red-flagged Huawei by putting it on the so-called Entity List, which requires American companies to obtain a license if shipping products to the Chinese company. Foreign companies using a certain amount of American technology for products sold to Huawei are also subject to the same restriction, lawyers have told Nikkei Asian Review. They risk legal repercussions in the U.S. if they fail to comply.

“Infineon decided to adopt a more cautious measure and stopped the shipment. But it will hold meetings this week to discuss [the situation] and make assessments,” one of the people said. It was not yet clear whether Infineon would resume doing business with Huawei after it clarifies the legal issues this week, one of the sources said.

While its sales to Huawei amount to a fraction of its annual revenues — just $100 million a year or less, according to one of the sources — Infineon’s decision could have serious repercussions for the Chinese company. It is already seeing sources for vital supplies to its telecom equipment and smartphone businesses begin to dry up. The move could influence other key European and Asian suppliers to take a similarly cautious approach, industry sources told the Nikkei Asian Review. Under the U.S. rule, companies that fail to obtain a licence for supplying an entity on the list risk being blacklisted themselves.

Infineon did not respond to the request for comments.

U.S. chipmakers Qualcomm and Qorvo have already stopped shipping products to Huawei, Nikkei Asian Review reported earlier. Neither company responded to requests for comment. American memory chipmakers Micron Technology and Western Digital also stopped shipment to Huawei, another source told the Nikkei Asian Review. Neither company responded to requests for comment. In preparation for the U.S. crackdown, Huawei has stockpiled roughly six months to one year of key components, Nikkei reported last week. Micron confirmed to the Nikkei Asian Review on Monday in a statement that “As a U.S. based company with a global footprint, Micron respects and complies with all laws and regulations in the U.S. and other countries where we operate.”

Google, which provides the Android operating system for Huawei smartphones told Nikkei Asian Review in a statement that it was “complying” with the U.S. order, which will require it to seek licences to continue business with Huawei. This means the Chinese company’s smartphones could lose access to updated versions of popular applications such as Gmail and Google Maps. However the U.S. company said “Google Play and the security protections from Google Play Protect will continue to function on existing Huawei devices.”  The blow to Huawei’s overseas smartphone business comes just as the Chinese company has overtaken Apple to be the world’s number two in the January-March period.

ST Microelectronics, another key European chipmaker, is set to have meetings this week to discuss whether it will continue shipping to Huawei, a source familiar with the plan told the Nikkei Asian Review. For now, ST Microelectronics is maintaining deliveries.

TSMC said on Friday the company owns a “complicated and sophisticated export control compliance system” and “based on the data in the system we are not changing our shipping practice for the time being,” Nikkei has reported.

Other Asian suppliers such as Japan’s Toshiba Memory, the world’s second biggest NAND flash memory provider, and Japan Display Inc, the screens supplier, told Nikkei they were investigating the implications for their businesses of the U.S. blacklist of Huawei.

Huawei’s founder Ren Zhengfei told Japanese media on Saturday at company headquarters in Shenzhen that it would be “fine” even if Qualcomm and other American suppliers could not sell chips to Huawei. “We have already been preparing for this,” Ren said in his first interview after U.S. restricted trade with his company last week.