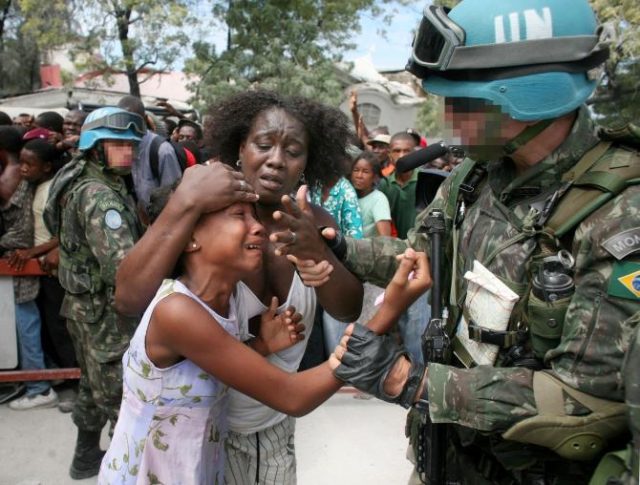 In it, Professor Macleod also estimated there are 3,300 paedophiles working for the world body’s various agencies alone.

And there has been an “endemic” cover-up of the sickening crimes for two decades, with those who attempt to blow the whistle just getting fired.

Sharing his dossier with The Sun, Prof MacLeod last night warned that the spiralling abuse scandal was on the same scale as the Catholic Church’s.

The respected academic said: “There are tens of thousands of aid workers around the world with paedophile tendencies, but if you wear a UNICEF T-shirt nobody will ask what you’re up to.

“You have the impunity to do whatever you want.

“The system is at fault, and should have stopped this years ago.” Professor MacLeod worked as an aid boss for the UN all over the world, including high profile jobs in the Balkans, Rwanda and Pakistan – where he was chief of operations of the UN’s Emergency Coordination Centre.

He is campaigning for far tougher checks on aid workers in the field as well as the abusers among them to be brought to justice, and wants the UK to lead the fight.

The professor’s grim 60,000 figure is based on UN Secretary General Antonio Guterres’s admission last year that UN peacekeepers and civilian staff abused 311 victims in just one 12 month period over 2016.

The UN also admits that the likely true number of cases reported against its staff is double that, as figures outside of war zones are not centrally collated.

Prof MacLeod also estimates that only one in 10 of all rapes and assaults by UN staff are reported, as even in the UK the reporting rate is just 14 per cent.

Based on evidence from Prof MacLeod, ex-Cabinet minister Priti Patel – who resigned in November last year – today accused senior officials at DFID of being part of the cover up.

Ms Patel said senior DFID staff tried to talk her out of making a critical speech about aid workers’ sex abuse, arguing that it was only by UN soldiers and to claim otherwise was “over-stepping the mark”.

Britain is one of the top 10 contributors to the UN budget, handing over £2bn a year.

Prof MacLeod insisted that meant the “difficult truth” that “child rape crimes are being inadvertently funded in part by United Kingdom tax-payer”.

He added: “I know there were a lot of discussions at senior levels of the United Nations about ‘something must be done’ but nothing effective came of it, and if you look at the record of whistleblowers, they were fired.

“We are looking at a problem on the scale of the Catholic Church — if not bigger.”

Senior Tory MP Conor Burns, who is Boris Johnson’s parliamentary aide, dubbed the Oxfam furore as just “the tip of an iceberg in finding out what has been going on”.

Mr Burns was a university friend of Prof MacLeod and called for him to be listened to very seriously.

Mr Burns added: “I believe that there has been systematic, organised and covered-up activity going on over many, many years”.

Penny Mordaunt tonight vowed to “step up our work to tackle sexual exploitation and abuse across the UN and other international organisations”.

In September last year, PM Theresa May also threatened to withhold cash from the UN and demanded it “win back trust”.

No10 today insisted there will be “zero tolerance” towards any acts of sexual abuse.

But Downing Street ducked out of ordering any investigation into Ms Patel’s allegations, despite their seriousness.

DFID also said “there no current investigations” into any senior officials turning a blind eye to abuse.

One angry Tory MP said Theresa May was refusing to act because the claims.

Commons Development Select Committee chair Stephen Twigg announced his MPs will grill aid bosses and ministers over the scandal as soon as Parliament returns from its half term break next Tuesday.