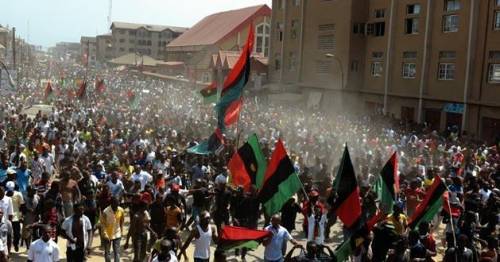 The 19th anniversary celebration of the Chief Ralph Uwazuruike-led Movement for the Actualisation of Sovereign State of Biafra (MASSOB) otherwise called Biafra Independent Movement (BIM) turned fatal on Wednesday when police opened fire on members of the movement.

But in reaction, another journalist ACMC spoke with said the police denied the allegation.

The journalist from another media organization other than Sahara Reporters we got the news feed from said he called the police in Onitsha and they denied such incident, saying they never shot any MASSOB member dead.

He said: “We were hoisting our flag at about 2 am yesterday morning at Upper Iweka axis in preparation for the anniversary when the police stormed the place in three Hilux vans and allegedly opened fire on us at a close range, which resulted in the killing of the two members instantly.

“They arrested 10 of us and over 15 got bullet wounds, even when they knew that we are a non- violent organisation struggling for a Biafran state”.

Amadi, who spoke through his Director of Finance, in Ogbaru, Ezeaka Martins, identified those killed as Innocent Okoye and Uche Ezinwanne, demanding the release of their corpses.

Also speaking, Chuks Nnaedozie, the Ogbaru Director of Security, gave the names of those injured and hospitalised as Clifford Nwankwo, Ndubuisi Ikpeazu Aloy Ibeh, and others yet to be identified.

On his part, Regional administrator for Onitsha North, Christian Umeaka revealed that one of his members had not been seen since he was arrested by the police when he went to hoist the flag.

“No amount of intimidation would stop us from struggling for a Biafran state,” he vowed.