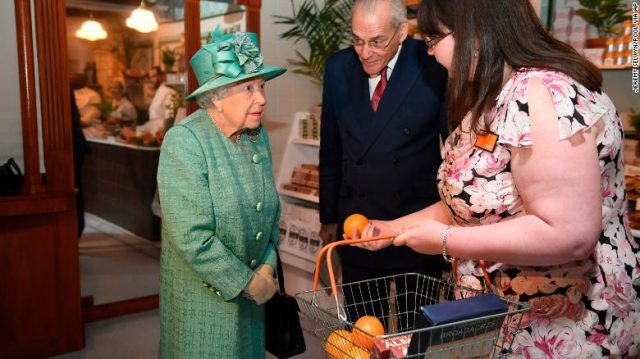 Staff demonstrated the checkout, now a ubiquitous sight in shops in many countries, to the British monarch, although she didn’t have a go at using it herself, CNN affiliate ITV reported.

However the Queen gamely joked around with staff, asking them if it was possible to cheat the machine.

The monarch was on a tour of a replica 1860s-style Sainsbury’s supermarket in Covent Garden, London, near the retailer’s first shop on Drury Lane.

The original store stocked only the basic essentials, specializing in butter and eggs, but Sainsbury’s is now a multi-million pound business.

During her visit the Queen met David Sainsbury, who is descended from John James and Mary Ann Sainsbury, the original founders of the business, ITV reported.

Earlier this month, the Queen sought to raise her online presence by recruiting a social media manager.

The royal household posted a position for a digital communications officer on its jobs listings website, with the successful applicant tasked with finding “new ways to maintain the Queen’s presence in the public eye and on the world stage.”