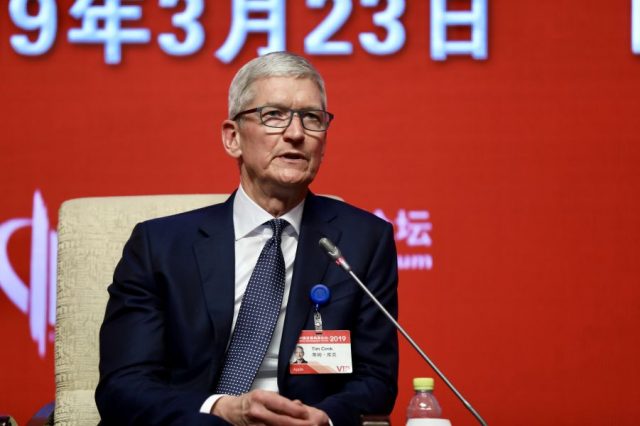 The U.S.-China trade war could take a big chunk out of Apple’s bottom line if China retaliates by banning its products, according to an analyst at Goldman Sachs.

Analyst Rod Hall said in a note to clients that Apple’s earnings could drop by 29% if the company’s products were banned in mainland China. The analyst cut his price target on Apple to $178 per share from $184, representing a 4.6% downside from Tuesday’s close of $186.60.

Apple’s China business accounted for more than 17% of its sales in its fiscal second quarter, coming in at $10.22 billion. The company also sells billions of dollar worth in iPhones every year in China.

“Should China restrict iPhone production in any way we do not believe the company would be able to shift much iPhone volume outside of China on short notice,” Hall said. “We believe that Apple is near its annual rapid ramp of new iPhone production to prepare for new device launches in the Fall so even a short term action affecting production could have longer term consequences for the company.”

Hall also noted that China’s “tech ecosystem” and local employment could take a hit if Apple products are banned. Most of Apple’s supply chain rests in mainland China, including the iPhone’s final assembly, which is executed at Foxconn.

Apple shares are down 7% for the month through Tuesday’s close as China and the U.S. ratchet up trade fears. The U.S. hiked tariffs on $200 billions worth of Chinese goods earlier in May. China retaliated by raising levies on $60 billion worth of U.S. imports.

Hall is not the only analyst raising concern over Apple’s exposure to China. On Monday, HSBC analyst Erwan Rambourg cut his price target on the tech giant to $174 per share from $180. Meanwhile, Credit Suisse analyst Matthew Cabral said Tuesday that Apple’s earnings per share would fall by about 15 cents a share for every 5% drop in Greater China sales.