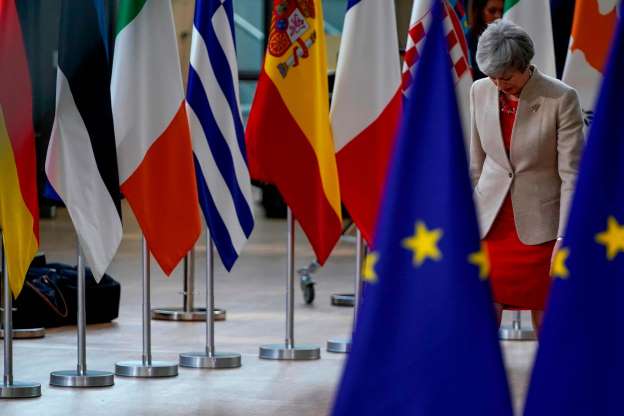 The announcement comes as a major blow to several Conservative leadership candidates, who have insisted on re-opening talks with Brussels if elected.

Arriving at a summit in Brussels on Tuesday, Mr. Juncker told reporters: “I was crystal clear. There will be no renegotiation.”

It comes as Theresa May lands in Brussels for her last EU summit as prime minister following the disastrous results for the Conservative Party in the European elections.

On the doorstep of the same meeting Theresa May also warned her potential successors against leaving the EU without a deal.

She said she was “not going to comment on the views of individual candidates”, but added: “I continue to have the view that it’s best for the UK to leave with a deal.”

But Juncker’s comment could mean that the three Cabinet ministers will be unsuccessful in their bid to re-open talks after the row erupted between leadership candidates on Tuesday.

In an interview with the Evening Standard, Mr Stewart attacked no-deal Brexiteers for “Wizard of Oz” thinking and vowed to vote against such a move “without hesitation”.

He also warned on no deal: “You would end up with Jeremy Corbyn.”

Mr Hunt stressed that pursuing no deal risked triggering a general election because it would be torpedoed in Parliament, and that the resulting verdict from voters would be “absolutely catastrophic” for the Tories.

Mr Hunt branded a policy of seeking to catapult the UK out of the European Union without a deal as “political suicide” and called for a “statesmanlike and robust” approach to trying to renegotiate the withdrawal agreement, even though Brussels has ruled this out.

He proposed a different negotiating team to also include the Democratic Unionist Party, the hardline Tory European Research Group, and voices from Scotland and Wales, so EU leaders would know that any agreement could win the backing of Parliament.

The newly elected 73 MEPs are heading to Brussels, along with the outgoing prime minister, where they will begin negotiating to form political groups.

Mrs May will meet with European Council president, Donald Tusk and then have an informal dinner with EU member states.