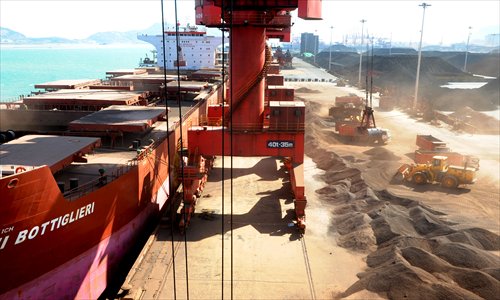 Industry players in a key rare-earth base responded positively overnight to rarely seen official indication that the strategic asset could be weaponized for the escalating trade war with the US.
Understanding the logic of such a move by the central government, some managers of the affected firms and enterprises said they are already focused on moving up the value chain and shifting their focus to the domestic market.
Asked whether rare earths will be used as a countermeasure against the US, a spokesperson for China’s top economic planner, the National Development and Reform Commission (NDRC), was quoted as saying on Tuesday night, “What I can tell you is that if anyone wants to use products made of China’s rare-earth exports to contain China’s development, the people across China will not be happy with that.” The anonymous NDRC official’s statement was deemed by some analysts as a clear-cut warning that Beijing may deploy rare earths as a weapon in the trade war.
The People’s Daily, the top newspaper in the country, published an editorial on Wednesday, emphasizing that the US shouldn’t “underestimate China’s ability to fight the trade war.”
“We are firmly aligned with the government’s stance on rare earths. They are a strategic asset which China should leverage in retaliation to US containment of Huawei and China’s technology drive,” a manager of a large rare earth metal producer in Ganzhou, East China’s Jiangxi Province, who spoke on condition of anonymity, told the Global Times on Wednesday.
“It’s time to play the card through which China will have a say on how the trade war can be solved,” the manager said.
China is the world’s largest producer and exporter of rare earths. China’s mines account for about 70 percent of global output. The US from 2014 to 2017 sourced 80 percent of its rare-earth imports from China, according to US government statistics.
In 2018, China exported 5,303,400 tons of rare earths at an export value of 3.39 billion yuan ($490.62 million), an increase of 3.6 percent over the same period in 2017, according to Chinese customs data released online.
Ganzhou accounts for one-third of the national total. Traveling across the prefecture-level city in southern Jiangxi, one of the first sights to greet visitors are the dozens of rare-earth suppliers and processors lining the streets. Even the airport name – Ganzhou Gold Airport – references a precious mineral.
The manager noted that it will take years for the US to build a complete rare-earth supply chain equivalent to Ganzhou – from upstream industries like mining and extraction to downstream such as producing ferro-aluminum and permanent magnets. China has overwhelming technology and cost advantages in almost all those sectors, he asserted.
Scaling down exports to the US was not a big deal to the industry, according to the manager, as dwindling supply could jack up already-low global market prices. Chinese rare earth-makers used to pocket “pennies” from such a global trade, he explained.
“As prices rise, Chinese producers will eventually benefit,” he said.

Trade efforts
Rare-earths suppliers have been accelerating their research and development of high-end applications and high value-added rare earth products such as permanent magnetic materials as part of efforts to be less dependent on foreign markets amid an escalating trade war.

On March 20, Chinese President Xi Jinping visited Ganzhou-based JL MAG Rare-Earth Company, a high-tech firm specializing in research and development of rare-earth permanent magnetic materials, the Xinhua News Agency reported.
The visit also cast the media spotlight on how Chinese manufacturers are responding to the trade war, inspired to climb up the value chain ladder and focus on profits from high-end products generated by domestic market.
Yu Xi, general manager of the Ganzhou Fortune Electronic, a company that specializes in manufacturing permanent magnets about 2 kilometers from ML MAG Rare-Earth, told the Global Times Wednesday that his company was trying to increase its bargaining power by increasing research and development and exploring high-end supplies to domestic consumers.
“The downstream of the industrial chain, like the application of neodymium magnetic materials in terminal products like phones and electrical motors are the most profitable,” said Yu, noting that more companies in Ganzhou are shifting from selling resources to adding value by producing more technology-intensive products.
“Every year we spend about 4 percent of our revenue on research and development,” Yu said. “We are also seeking cooperation with universities and institutions to work on developing new technologies in rare-earth production.”
The company has been awarded 24 Neodymium magnet product patents.
“The demand in the domestic market for permanent magnets is also high and still growing,” Yu said. “For example, we are supplying Huawei and we are also testing our materials on magnetic levitation trains.”
Governments have also provided tax refunds and preferential land leasing terms to high-tech rare-earth firms, the manager said.
But there are rooms for further improvement. The NDRC official said that although the rare-earth industry in Ganzhou is relatively big, the development is also facing many challenges. For example, the R&D investment is insufficient, and the application of the high-end industry needs to be further improved.
A representative from a large rare-earth company in North China told the Global Times on Wednesday that in terms of the application end, especially the high-end application in such sectors as the aerospace and military, China still lag behind some developed countries.
The representative asked to remain anonymous due to sensitivity of the matter.
For instance, the permanent magnet motor, a smaller motor with better functional performance compared with the regularly excitation motor, still lacks presence in China due to insufficient fundamental research in the structure of the rare earths, the executive said.