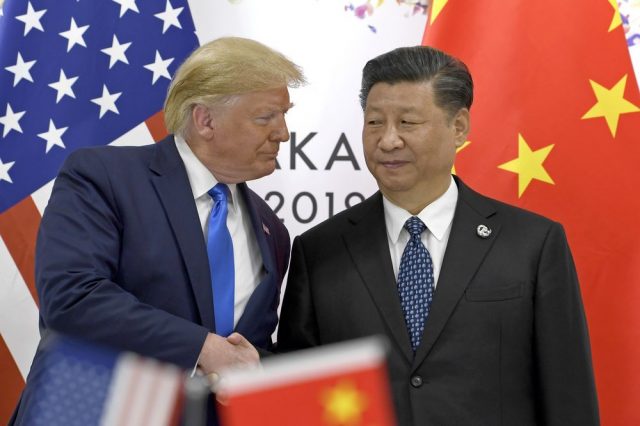 President Donald Trump said he eased restrictions on China’s most prominent technology company as part of a trade truce with Beijing, removing an immediate threat looming over the global economy even as a lasting peace remains elusive.

Trump said Chinese President Xi Jinping had promised to buy “tremendous” amounts of U.S. agricultural products in exchange. “We’re going to give them a list of things we’d like them to buy,” Trump said at a news conference following the Group of 20 summit in Osaka, Japan.

But Chinese official media reports said only that the U.S. president hopes China will import more American goods as part of the truce.

After Trump and Xi met at the G-20 on Saturday, the two countries plan to restart trade talks that broke down last month. Trump told reporters he wouldn’t put additional tariffs on China for the “time being,” and that he’ll allow U.S. companies to supply Huawei Technologies Co. The Commerce Department last month blacklisted the company for national security reasons.

The Trump administration has been lobbying allies around the world not to buy Huawei equipment, which the U.S. says could be used for Chinese espionage. The company has denied the allegation. China has said it wanted Huawei removed from Commerce’s blacklist as soon as possible and has accused the U.S. of unfairly using state power to harass a private company.

“U.S. companies can sell their equipment to Huawei,” Trump said. “We’re talking about equipment where there’s no great national security problem with it.”

Huawei reacted positively to the news on its verified Twitter account: “U-turn? Donald Trump suggests he would allow #Huawei to once again purchase U.S. technology!”
The return to the negotiating table ends a six-week stalemate that has unnerved companies and investors, and at least temporarily reduces fears that the world’s two largest economies are headed into a new cold war. Still, it’s unclear whether they can overcome differences that led to the collapse of a previous truce reached at the G-20 in November.

Trump and top officials in his administration alleged that Beijing had reneged on provisions of a tentative trade deal. It’s not clear if Xi agreed to return to previous agreements as part of the new truce.

Trump said he had not yet decided how to allow U.S. companies to continue selling to Huawei or whether to remove the tech giant from the Commerce Department’s entity list. He said he would meet with advisors next week to determine how to proceed.

“As for President Trump’s comments that some restrictions on Huawei will be removed, we will of course welcome this if those words are put into action,” Chinese diplomat Wang Xiaolong said at a briefing at the G-20.

The move to blacklist Huawei was seen as a major escalation that could hurt the company’s supply chain. It had also prompted lobbying from U.S. companies like Intel Corp. and Alphabet Inc.’s Google, worried about losing their sales to a major client.

“I like our companies selling things to other people, so I allowed that to happen,’’ he said.

It was not clear how long the exemption would last. Trump said he had agreed with Xi to wait until the very end of trade talks to resolve broader issues around Huawei, including Washington’s lobbying campaign against allies buying its 5G equipment.

“Huawei is a complicated situation,” Trump said. “We’re leaving Huawei toward the end. We’ll see where we go with a trade agreement.”

The move is likely to draw criticism in Washington where national security hawks have urged Trump not to ease any pressure against Huawei. The company has long been the target of concern at the Pentagon and intelligence agencies in part over what the U.S. claims are its close ties to the Chinese military.

Trump said he didn’t discuss the case of Meng Wanzhou, the daughter of Huawei founder Ren Zhengfei, who has been under house arrest in Vancouver since being detained by Canadian authorities on Dec. 1 last year over a U.S. extradition request.

The U.S. has accused Meng of tricking banks into conducting more than $100 million worth of transactions for Huawei that may have violated U.S. sanctions on Iran. Meng faces multiple criminal charges in the U.S., including bank and wire fraud, money laundering and conspiring to obstruct justice, each of which carries a maximum sentence of 30 years in prison.

Since trade talks collapsed on May 10, Trump has raised tariffs on $200 billion of Chinese goods to 25% from 10%. He had indicated before the G-20 that the next step could be a 10% tariff on all remaining imports from China — some $300 billion worth, from smartphones to children’s clothes.

Concern about the standoff has prompted investors to bet on central-bank easing and pile into havens. Treasury yields have tumbled to their lowest level in years. The Japanese yen, a traditional beneficiary of flight to quality, has gained, while the U.S. dollar has slipped across the board, including against China’s yuan. Stocks have seesawed on each new twist in the trade tug-of-war.

Xi spent much of the summit’s first day Friday promising to open up the Chinese economy, and chiding — though not naming — the U.S. for its attack on the global trading system.

In remarks to African leaders on Friday, Xi took a not-so-subtle swipe at Trump’s “America first” trade policy, warning against “bullying practices” and adding that “any attempt to put one’s own interests first and undermine others’ will not win any popularity.”

Xi also called out the U.S. over Huawei and said the G-20 should uphold the “completeness and vitality of global supply chains.” China insisted this week that Huawei must be removed from the blacklist under any deal.