The Nigerian National Petroleum Corporation (NNPC) and the Nigerian Navy have pledged to deepen collaboration to tackle the menace of crude oil theft and attacks on oil and gas facilities.

The two organisations came to the resolution when the NNPC GMD, Mallam Mele Kyari paid a courtesy visit to the Chief of Naval Staff, Vice Admiral Ibok Ekwe Ibas at the Naval Headquarters on Wednesday.

Speaking at the meeting, Mele Kyari expressed gratitude to the Navy for its efforts at securing the nation’s oil and gas facilities in the creeks and deepwater.

He said while the intervention of the Navy had brought some sanity to the system, there was need to do more as crude oil theft was still a potent reality in the nation’s oil and gas industry.

He said NNPC was ready to support the Navy in any initiative it could come up with to further check the menace.

In his presentation, the Chief of Naval Staff, Vice Admiral Ibo Ekwe Ibas, said the Navy was currently working at integrating its system with those of other maritime operators such as the Nigeria Ports Authority (NPA) and Nigerian MaritimeAdministration and Safety Agency(NIMASA) to facilitate efficient operation.

He said the Navy has over 130 impounded vessels some of which are laden with stolen crude oil and petroleum products, stressing that it would live up to its mandate and work towards ending all forms of criminality in the nation’s territorial waters.

He listed a number of challenges to its operations which he said were receiving attention, adding that the corporation’s intervention in resolving some them was welcomed. 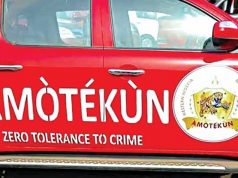