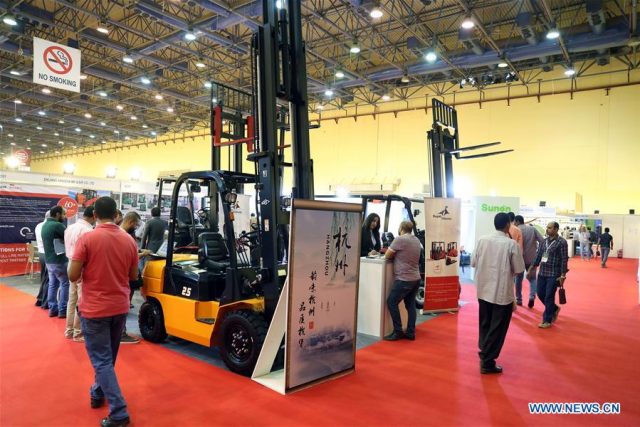 A gate-like structure in the open air painted in red, reading “China Trade Fair” led to a stairway with similar red banners on both sides, taking the visitors to a circular building hosting the largest Chinese international trade exhibition.

The sixth edition of “China Trade Fair Egypt” kicked off on Saturday at two halls of a stylish building in Cairo International Convention Center in the Egyptian capital.

The three-day fair occupies an area of about 10,000 square meters, introducing in more than 400 booths the products of at least 195 Chinese manufacturers to Egyptian businessmen and shortening the distance for their joint partnerships.

Coming from 11 Chinese provinces, the exhibitors display a variety of products from a needle to an anchor, including home appliances, electronics, furniture, textile, bulbs, leather products, gardening and landscaping tools, as well as technologies, industrial machinery, building material, forklifts and many other heavy and light products.

The Chinese ambassador hailed the Chinese-Egyptian growing relations under China’s Belt and Road Initiative (BRI) that seeks win-win partnerships among participating states, noting that China has been the largest trade partner and exporter to Egypt for seven consecutive years since 2012.

“The Chinese embassy in Cairo provides full support to the Chinese companies to find cooperation opportunities with the Egyptian side and Egypt is exerting continuous efforts to improve the investment environment for Chinese investors,” Liao said during the opening ceremony.

“Until 2018, the total Chinese investments in Egypt reached more than 7 billion U.S. dollars, providing about 30,000 direct job opportunities to Egyptians,” the Chinese ambassador added, noting that trade exchange between China and Egypt hit 13.87 billion U.S. dollars in 2018, marking an annual increase of 27.06 percent.

Cairo Chamber of Commerce has been supporting China Trade Fair in Egypt every year and contributing to its growing popularity in the most populous Arab state.

Khaled Mostafa, secretary general and chief executive of Cairo Chamber of Commerce, said that “the fair brings China here to Egyptian importers and cuts the distance short between them”.

“As you see, many businessmen are now registering to enter the fair that has become very popular in Egypt, and we hope all these leading Chinese companies will consider investing in Egypt, as I believe they can operate successfully here in a win-win situation,” Mostafa told Xinhua.

During the first day of the exhibition, a contract was signed between an Egyptian businessman and a Chinese company for fountain landscape engineering as an early fruit of the fair.

“This is the first time to join this exhibition in Egypt but we have been doing projects with Egyptian partners in Egypt for more than 10 years,” Wu told Xinhua after signing the contract.

“We have many high-quality products in China and we would like to bring them to Egypt to add to the development of the Egyptian market,” he added.

His Egyptian partner Ashraf Mansour, chairman of Mantech, explained that part of his company’s business was the musical fountains and amusement rides, so he agreed with China’s Redbud to buy from them the knowhow to establish a joint factory in Egypt.

“We will jointly establish the largest factory in the Middle East for the elements of musical fountains and amusement rides here in Egypt, combining China’s advanced technology with our experience to manufacture and export competitive products,” the Egyptian businessman said.

Egypt is one of the main stops of China Trade Fair in Africa. The giant trade exhibition is annually held in countries worldwide besides Egypt, including Nigeria, South Africa, Kenya, the United Arab Emirates, Jordan, Turkey, Iran, India, Brazil, Mexico, Poland and Kazakhstan.

China’s Meorient International Exhibition Company has been the organizer of the big event in all its six editions in Egypt.

Pan Jianjun, Meorient’s president, said that China Trade Fair in Egypt was very important under China’s BRI, as it provided a major platform for trade exchange between the two sides.

“So, we will hold symposiums for this purpose and we brought a delegation of Chinese investors to visit industrial areas in Egypt, including China’s TEDA economic zone in Suez province,” Pan added.  XINHUA 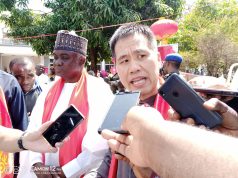 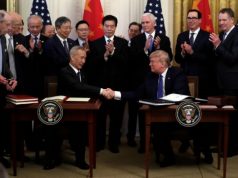 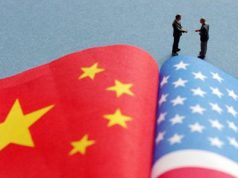