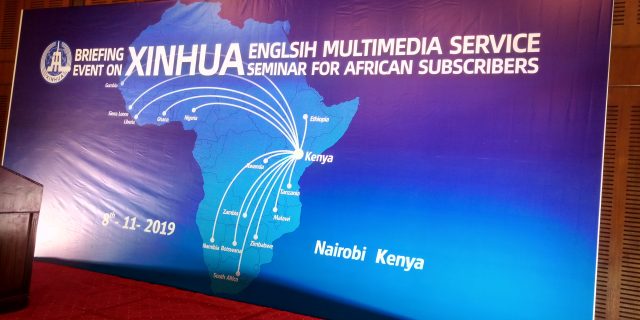 The Chinese news agency, Xinhua is on Friday holding a parley with 43 African journalists from 15 countries who are subscribers to their services.

They all represent different media organizations in Africa that are subscribers to the multimedia service of Xinhua.

The event that holds at the Laico Regent Hotel, Nairobi is to be declared open by the Deputy Editor in Chief of the agency in charge of Africa…

The forum would afford an opportunity for the agency and the African subscribers to evaluate the services of the agency and also proffer solutions for better impact in the future.

The Friday event is however with the English service subscribers, which is expected to feature papers to be presented by media executives.

Keynote speech to kick off the forum would be made by Mr. Wu Zhiqiang, the Editor-in-Chief and Deputy Director General of Xinhua in Africa.

That would be followed by the signing of three memorandum of partnership (MoP) with news organisations from Ghana, Liberia and Rwanda.

Immediately after would be the presentation of a paper by Emewu of the ACMC which evaluates Xinhua services in Africa and suggests ways for improvement.

The gathering targets to be further deepening of the Africa China alliance powered on the platform of the Forum on China Africa Cooperation (FOCAC) and later on the larger agenda of the China’s flagship diplomatic agenda, the Belt and Road Initiative (BRI)