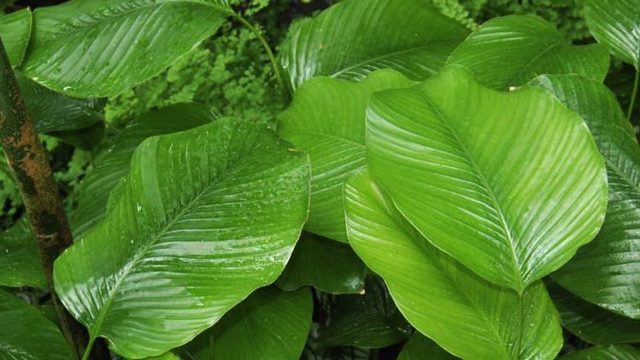 Nigerian researchers have demonstrated how Moi moi leaf plant (Thaumatococcus danielli) protects against the complications of diabetes such as kidney damage as well as liver failure.

In fact, research has shown that Thaumatococcus daniellii seed is a natural source of antioxidant principles. It also showed that the in vivo antioxidant properties were favourable when compared to vitamin C, and this seed can be exploited for antioxidant bioactive components for the amelioration of liver and kidney diseases.

One of the studies published in the Journal of Biological Sciences and Science Alert concluded: “This study indicates the possible antioxidant properties of Thaumatococcus daniellii seed on rats’ kidney and liver, which is highly comparable with vitamin C (a known antioxidant). The study could also lead to the discovery of a novel antioxidant lead compound, in the seed, for amelioration of liver and kidney diseases.”

Botanically called Thaumatococcus daniellii, Moi moi leaf plant belongs to the family Marantaceae. It is commonly referred to as miraculous fruit, miraculous berry, serendipity berry and katamfe/katempfe. In Nigeria, it is popular referred to as soft cane. The Yorubas call it Ewe-Eran or Adundunmitan and to the Igbos it is called Akwukwo Elele.

Thaumatococcus daniellii is a plant species from Africa, natives to the rain forest of Western Africa, known for being the natural source of thaumatin, an intensely sweet protein that is of interests in the development of sweeteners.

The seed is relatively high in protein, starch and minerals, especially calcium and magnesium. Traditionally, the leaves of Thaumatococcus daniellii are used for wrapping various types of foods such as bean cake, yam flour, rice and pounded yam for both domestic use and commercial enterprise. They are also used for preserving kolanuts and as food supplement to some ruminants including goat.

It is also used in traditional medicines in Ivory Coast and Congo where the fruit is used as a laxative and the seed as an emetic and for pulmonary problems. The leaf sap is used as an antidote against venoms, strings and bites. Leaf and root sap are used as sedative and for treating diabetes mellitus and in sanity.

Glibenclamide is an oral hypoglycaemic drug, which stimulates insulin release from the pancreas for the treatment of type 2 diabetes.

The third study by researchers from the Department of Biochemistry, College of Science and Technology, Covenant University, Canaanland, Ota, Ogun State, is titled “Antioxidant and Biochemical Evaluation of Thaumatococcus daniellii Seeds in Rat.” It was published in Journal of Biological Sciences.

According to the study, the extract and Glibenclamide, however, showed anti-diabetic effects as levels and activities of these markers were restored nearly to controls in groups C, D and E with significant effects exhibited by group C and in the order C>D=E.

The researchers concluded: “Results are suggestive of the anti-diabetic and modulatory effects of the extract on Glibenclamide activity and its use could be encouraged.”

The researchers noted: “The results from the evaluation of the various biochemical parameters studied are indicative of a possible hypoglycaemia (lowers blood sugar), hypolipidaemia (lowers blood fat), anti-inflammatory (painkiller), antioxidative (protects against cell damage) and hepatoprotective (protects the kidneys) potentials of the extract and in combined treatment with the standard drug, an indication that the extract contain certain bioactive agent with antioxidant properties, which may act by probably inhibiting or mopping Reactive Oxygen Species (ROS) formation in diabetes, a property which may be exploited in drug discovery, while the extract behavior in the combined treatment are indicative of its modulatory effects on the standard drug or possibly working synergistically with the drug.

According to the researchers of the second study, the leaves of Thaumatococcus danielli have been traditionally used in folk medicine to treat malaria in Nigeria. However, there is no report on whether these leaves contain nephron-protective activity. Thus, the ethanol leaf extract was investigated for Nephron-protective activity in Streptozotocin induced diabetic rats.

First, the LD50 (Lethal Dose) of the leaf was determined using standard procedure. Rats were assigned to five groups (A-E) of five rats. Except for the control group, each group was made diabetic using Streptozotocin (65 mg/kg/b.wt. i p). The treated groups received 0.5 ml of glibenclamide (25mg/kg/b.wt, o.p), 250 and 500 mg/kg/b.wt, o.p of Thaumatococcus danielli respectively. After 14 days of treatment, animals were sacrificed under light anaesthesia. Data were expressed as Means ± S.D (n=5) and were analyzed using one-way ANOVA followed by Dunnet’s test, values were considered significant at p<0.05.

The plant showed a LD50 greater than 5000 mg/kg/b.wt in albino rats observed for 72 hours. A significant (p<0.05) decreased in serum Na+, Cl-, HCO-3, total protein, and an insignificant increase in K+, urea and creatinine level were observed in the diabetic group when compared with the normal group. Oral administration of plant extract and glibenclamide significantly restored the electrolytes to near normal. Histological alterations such as glomerulonephritis, and tubules infiltration by inflammatory cells observed in diabetic control were also reversed.

The researchers concluded: “This study suggests renal protective ability of the plant against impairment due to hyperglycemia (high blood glucose).”

According to the third study, despite numerous reports of medicinal uses of
Thaumatococcus daniellii plant, there remains a dearth of information on the in vivo effect of the seed. The study assessed the antioxidant and biochemical effects of T. daniellii seeds in the liver and kidney of male Wistar rats.

Seeds were macerated with ethanol and filtrate was concentrated to yield an ethanolic crude extract. Rats were orally dosed with vitamin C, 500, 1000 and 1500 mg of the extracts for 14 days. Antioxidant and biochemical parameters were evaluated. Liver histology was examined.

It was observed that T. daniellii seed reduced the amount of total body weight gain but did not have any effect on organ weight. Treatment also resulted in significant increase in hepatic SOD and GSH. SOD, an endogenous enzymatic antioxidant exerts its function by scavenging radicals while GSH (an endogenous non enzymatic antioxidant). It was only at the highest dose that renal GSH increased significantly. These antioxidant effects were associated with maintaining bilirubin concentration and reducing AST activity in the liver. Histopathological observations were in correlation with the biochemical results showing that there was no pathologic abnormality.

The results of this study indicate that T. daniellii seed is a source of natural antioxidant and may be exploited for the treatment of kidney and liver diseases.

The researchers explained: “From the result, there was no decrease beyond 10 per cent of the animal organs weight indicating that T. daniellii seed may be non-toxic to the organs. The observed difference in weight gain may be as a result of the high crude fibre, low fat content and fat yield potential of the seed which has been reported in previous studies. It may also be as a result of the crude fibre present in the seed binding to cholesterol in the gut and delaying gastric emptying and cholesterol synthesis thus reducing body weight. This is in line with the study conducted by Iheagwam et al. and Elemo et al.

“Due to the metabolic processes that are simultaneously carried out in cells, reactive oxygen species (ROS) are produced. Endogenous and exogenous antioxidants (enzymatic and non-enzymatic) protect cells from ROS attack. Plants are made up of secondary metabolites and phyto-constituents with excellent antioxidant properties, which help in prevention and management of diseases. SOD, an endogenous enzymatic antioxidant exerts its function by scavenging radicals while GSH (an endogenous non enzymatic antioxidant) conjugates these radicals preventing cellular injury through lipid peroxidation of cell membranes. MDA is the consequent product of lipid peroxidation and an index of measuring the metabolic level of oxidative stress. The observable increase in SOD and GSH after T. daniellii seed administration may be as a result of synergistic stimulatory effects of various active components present in the seed on the synthesis of these enzymes.