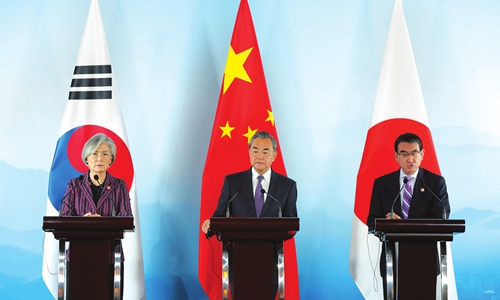 China, Japan and South Korea are ready to lower trade barriers for each other, such as cutting tariffs, as they move to hold a fresh round of talks on forging a free trade deal, experts predicted.

By such cooperation, the three Asian neighbors aim to hold together and withstand the chill of US-initiated protectionism, they added.

China will reportedly hold a new round of trilateral free trade agreement (FTA) talks with South Korea and Japan on forging a free trade deal, according to the Yonhap News Agency. The negotiations were scheduled to start on Wednesday in South Korea’s capital Seoul and would last three days.

During the talks, trade officials from the three countries are expected to discuss ways to open goods and services markets, while lowering other trade barriers, the report noted.

The three countries held the 15th round of FTA talks in April, when they reached a consensus to further increase the level of liberalization in areas including commodity trade, services trade and investment, said the spokesperson of China’s Ministry of Commerce Gao Feng on November 14.

On the day the new round of FTA talks opened, experts expressed “positive expectations” for the negotiations to bear fruit, as they argued that all countries are seeking ways to offset the negative impact forced on their economies by rising protectionism initiated by the US.

“The global economic climate, characterized by a rising trend of US-initiated protectionism, has not been very friendly to those countries, pushing them to do something to change the status quo,” Zhou Rong, a senior research fellow at the Chongyang Institute for Financial Studies at the Renmin University of China, told the Global Times on Wednesday.

China has been locked in a mounting trade war with the US, but it isn’t just China that feels the friction.

“In particular, Japan, where half of its GDP is dependent upon international trade, has been caught in the protectionism trend. This situation worsened after the Trump administration repeatedly threatened to increase import tariffs on Japanese cars,” Shi Jianxun, a professor at Tongji University in Shanghai, said.

China’s trade volume with South Korea slumped 10.8 percent on a yearly basis in the first 10 months this year, while imports from Japan declined by 5.2 percent year-on-year, customs data showed.

“China, Japan and South Korea share the common ground that they need to put friction aside and hold together. When the three countries, which hold one-fifth of the world’s aggregate trade, cooperate, the trade friction pressure can be relieved for all of them,” Shi said.

Zhou said that the three countries will be able, and are also “prepared to” cut tariffs for each other, something very likely to happen as fruits of the upcoming FTA talks.

“Of course they might do it in stages, or they may do it all at once. But the trend is clear,” he said.

The three countries already reached a deal along with 12 other countries on the Regional Comprehensive Economic Partnership (RCEP), a mega Asia-Pacific trade pact, earlier this month. India has opted out of the RCEP deal.

Shi said that challenges to the FTA talks still exist, such as overlapping industries among the three economies, or the political friction between Japan and South Korea, but stressed that “interests outweigh differences.”

“I think imports of Japanese and South Korean goods like agricultural and raw material products might be a blow to China’s existing industries. China should consider such influence aside from its opening-up stance and confidence,” Shi said.

Zhou said that even if the FTA talks don’t lead to specific results, it’s important that the three countries maintain an open atmosphere. “Unlike US hegemony, Asian giants are willing to talk.”