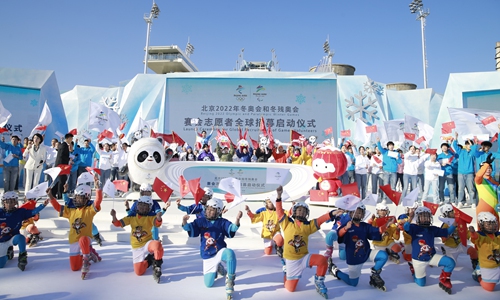 The plan was announced at Beijing 2022 Olympic and Paralympic Winter Games Launch Ceremony for Global Recruitment of Games Volunteers in Beijing on Thursday, December 5, which is also the 34th International Volunteer Day.

The Beijing Organizing Committee for the 2022 Olympic and Paralympic Winter Games (BOCWOG) is going to recruit volunteers for the Winter Games and Winter Paralympic Games for 12 different types of services, including media operations and broadcasting, human resources, technical operations and transportation, according to a document the BOCWOG sent to the Global Times on Thursday.

The Beijing 2022 Winter Olympic Games and Winter Paralympic Games volunteer logo was also unveiled at the ceremony, with red and yellow representing enthusiasm and passion. The upper part of the logo is made up of three “V” letters symbolizing volunteers, and a smiley face symbolizes dedication, love and smile.

Thomas Bach, president of the International Olympic Committee, said volunteers are an integral part of the Olympic preparation team. He encouraged the public to participate in the sports fest.

“As Beijing is making history as the first city in the world to hold both the summer and the winter editions of the Olympic Games, I can only encourage everyone to be a part of this next exciting chapter of Olympic history. Becoming a volunteer to the Winter Olympic Games Beijing 2022 will be your experience of your lifetime,” said Batch on a video played at the ceremony on Thursday.

Many Chinese celebrities, including actor Jackie Chan, pianist Lang Lang and singer Cai Xukun, participated in the launch ceremony on Thursday and showed their support on their official Sina Weibo accounts.