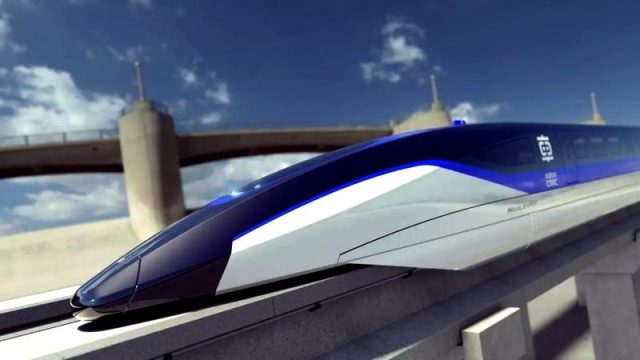 The world’s first Beidou satellites-navigated bullet train was put into service on Dec. 30, 2019, connecting Chinese cities of Beijing and Zhangjiakou.

The autonomous smart bullet train made a remarkable performance in the first 15 days since the service was launched. Forty-one pairs of passenger trains have been deployed, carrying 783,300 passengers with a seat occupancy rate of 95 percent.

Yang Yang, chairwoman of the Athletes’ Commission of Beijing Organising Committee for the 2022 Olympic and Paralympic Winter Games, boarded the debuting train of the Beijing-Zhangjiakou high-speed railway on Dec. 30, 2019 for an inspection tour of arenas in Chongli, a district in north China’s Zhangjiakou where all skiing and biathlon events will be hosted during the 2022 Beijing Winter Olympics.

“The time needed between Beijing and Zhangjiakou competition zones is now reduced to around an hour, which is a great promotion for both organizing the Winter Olympics and popularizing the winter games that is practiced by 300 million people,” Yang said, adding that China has fulfilled its promise made when bidding for the games.

According to him, the Fuxing bullet trains are able to control its error within 10 centimeters braking from 350 kilometers to 0 kilometers per hour. In addition, the trains can save 15 percent of electricity.

The trains running on the Beijing-Zhangjiakou high-speed railway are autonomous as they are connected with the Beidou Navigation Satellite System (BDS). “There are still drivers in the cabin on other tasks, so the passengers don’t have to worry about it,” said Zhang Bo, a researcher from Locomotive & Car Research Institute, Chinese Academy of Railway Sciences.

Drivers of high-speed trains used to focus on piloting the locomotive, and now they can shift their attention on emergency and malfunction response. “This will not only lower the working intensity of the drivers, but also improve the energy-saving level and comfort of the trains by collecting and calculating operation data,” Zhang said.

The Beijing-Zhangjiakou high-speed railway has a gradient of over 30 percent. The Fuxing bullet trains, after upgrading, are able to climb the slopes even when they lose half of traction. The trains can charge their underbody batteries when running, and once outages happen, these batteries are able to drive the trains to nearby stations.

With a screen outside each car of the trains where the seat numbers are shown, passengers will be guided to their seats within the shortest time. Besides, the lighting in the cars can adjust brightness automatically according to the sunlight, and the improved sound-proof technology has reduced noise in the cars by at least 1 DB.

During the past century, Chinese railway has never stopped its steps of independent innovation. The Beijing-Zhangjiakou high-speed railway is building a new model for China’s high-speed rail construction.