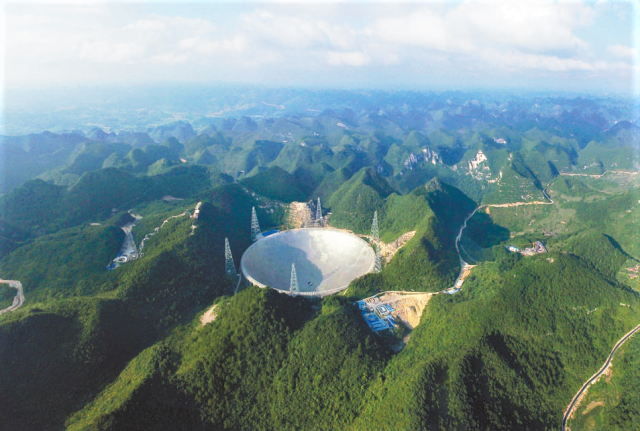 In April 2018, observation time of FAST, the world’s largest and most sensitive radio telescope, was open to astronomers for the first time in its trial run. The facility has shown stable and reliable performance in the past near two years.

The sensitivity of FAST is over 2.5 times that of the world’s second largest single-dish radio telescope, marking the first time that a Chinese-built radio telescope has secured the commanding position of main performance index.

From site selection in 1994 to the beginning of construction in 2011 and the completion of the project in 2016, it took China more than 20 years to finally see FAST be put into use.

FAST is an important facility that enables human beings to directly observe planets in remote galaxies and search for cosmic environment similar to that of the solar system and the earth as well as potential intelligent life.

With a diameter of 500 meters and a receiving area equivalent to about 30 football fields of standard size, the main structure of FAST looks like a giant pot. The facility has been used for observation in an all-weather manner, helping make many discoveries since it was put into use.

In 1994, a group of scientists, including the chief scientist of the FAST project Nan Rendong, proposed the idea of building a spherical reflector in the karst depression of southwest China’s Guizhou Province.

The suggestion had undergone a great number of deliberations and tests since, and was eventually put into practice after the realization of breakthroughs in many key technologies in innovative research of many Chinese scientists from multiple scientific research institutions.

In the eyes of Nan, who passed away in 2017 due to illness, FAST is an accomplishment of China, but it was designed to serve the entire world. Building a great telescope for the next generation of scientists had always been a goal of Nan.

Nan had enjoyed the assistance of his foreign friends during the construction of FAST. For instance, his German friends helped him with the engineering simulation of the project, and his Australian friends helped finish the building of the 19-beam receiver on the giant telescope.

So far, FAST has helped discover 146 high-quality pulsar candidates, among which 102 pulsars have been confirmed. The amount of pulsars identified by FAST in the past over two years is more than the total number of pulsars discovered by research teams in Europe and the United States during the same period.

FAST’s passing the acceptance inspection means the baton of FAST was formally handed over by engineers to scientists, according to Jiang Peng, chief engineer of the project.

The telescope will be brought into full play in scientific observations, which are expected to yield considerable important scientific output in the next two or three years, said Jiang, adding the performance of the facility will be further stabilized in the meantime.