As airlines ground flights to China and travelers cancel bookings in response to the coronavirus, the global aviation industry is bracing for a hit many are comparing to the SARS virus in 2003. That outbreak wiped out some $10 billion in revenue, and China’s importance as a market for the industry has ballooned since.

International travel in and out of China is now 10 times what it was in 2003, representing an additional 450 million passengers a year, according to the International Air Transport Association, a trade group. For United Airlines Holdings Inc., UAL -2.39% for instance, China accounted for about 7% of passenger revenue last year, according to Raymond James analyst estimates.

“With numerous travel restrictions in place, a high media profile and the increasing economic importance of China and wider Asia on the global economy, the Wuhan virus has the potential for a greater near-term impact” than severe acute respiratory syndrome, analysts at Shore Capital said in a note to clients.

On Wednesday, British Airways, owned by International Consolidated Airlines Group SA, Deutsche Lufthansa AG and Indonesia’s Lion Air became the first airlines to suspend flights to and from mainland China as a result of the outbreak. Other carriers, including United and Hong Kong’s Cathay Pacific Airways Ltd., have been cutting back capacity to manage a drop-off in demand.

American Airlines Group Inc. said Wednesday it was suspending Shanghai and Beijing service from Los Angeles between Feb. 9 and March 27, citing declining demand. The airline will continue flying between Dallas-Fort Worth and China.

Delta Air Lines Inc. said Wednesday it would cut the number of weekly flights it operates between the U.S. and China in half, from 42 currently to 21. The airline said the reduced schedule will be in effect from Feb. 6 through April 3.

About 6,632 domestic and international flights have been scrapped since Jan. 23, making up about 8.8% of total flights in and out of China, according to data from industry data provider Cirium. China Southern Airlines Co., a small stake of which is owned by American, and China Eastern Airlines Corp., in which Delta Air Lines Inc. holds a small stake, were the worst hit with over 1,000 flights canceled at each airline.

Another exposed airline: Air Canada allocated about 6% of its capacity to China in 2019, according to an analysis by Cowen. On Wednesday it said it will suspend all direct flights to Beijing and Shanghai between Jan. 30 and Feb. 29 following an updated travel advisory from the Canadian government. Air Canada operates direct flights to Beijing and Shanghai from Toronto, Montreal and Vancouver.

Airlines have cited steep drops in bookings. Many companies have restricted business travel except when absolutely necessary.

Aircraft-leasing companies are likely to receive requests to defer some deliveries from “smaller or weaker Chinese airlines, and potentially others with significant business on routes to and from China,” S&P Global Ratings analysts wrote in a note. “Some of these airlines may fail and turn back planes to the lessors.”

Still, some analysts point to the relatively short-term impact that some previous health crises have had on the industry. The current outbreak is “guaranteed to disrupt passenger traffic in the near-term, especially as travel restrictions increase,” Credit Suisse analyst Joe Caiado wrote this week. “But history suggests that the impact of global health scares on the air transport industry is temporary.”

There could also be some winners. In 2003, European airlines benefited from rebookings of holidays away from Asia into domestic trips on the continent, said Goodbody analyst Mark Simpson.

Airlines are also smarter and more agile than they were in 2003. “You can see in how airlines have been switching off routes to China in the last 24 hours that, since the financial crisis, we’ve seen a real appreciation from airlines on how to pivot capacity,” Citi Research analyst Mark Manduca said.

Based on the impact on travel between Hong Kong and Europe in the wake of the SARS crisis, investors are estimating a 10% drop in demand in traffic from China to Europe as a best-case scenario and a 30% drop in the worst case, Mr. Manduca said. That, he said, could roughly translate to a 5% to 15% drop in prices.

On the ground and in the air, airlines and airports have been rolling out other measures including temperature scans on aircraft and on arrival. The chief executive of Thai Airways International PCL held a press conference on Wednesday to address a video that showed cleaning crew in hazmat suits spraying down the inside of an aircraft. The airline is taking the measure on all aircraft arriving from China. 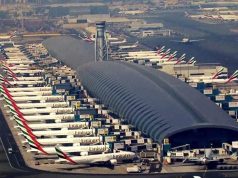