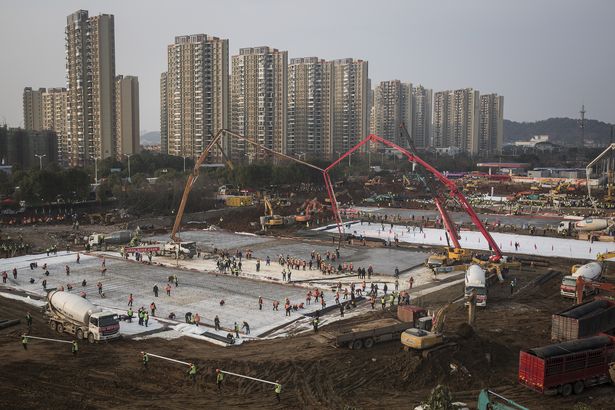 China has opened its first coronavirus hospital after around 500 workers and volunteers spent just 48 hours converting an empty building.

The medical building had been set to open in May, but following the deadly outbreak, it was all hands on deck to get it completed.

It now boasts 1,000-beds and the first batch of coronavirus patients were transferred at around 10.30pm last night.

It is expected to relieve some of the pressure on doctors and nurses in Hubei province – the epicentre of the outbreak – where overwhelmed hospitals were running out of beds, masks and other supplies as they were inundated with patients.

Two pop-up hospitals are also currently being built from scratch to treat patients with the SARS-like virus that has killed more than 130 people in the country.

Hundreds of workers are racing to build a second hospital, called Huoshenshan or Fire God Mountain Hospital, from scratch.

Teams are aiming to finish the 1,000-bed facility, which covers six acres in suburban Wuhan, in less than two weeks, with the first patients expected to arrive on February 3.

A third hospital, also being built from scratch, is due to open on February 5 and there are plans for a fourth.

The third facility is called Leishenshan, or the Thunder God Mountain Hospital.

It is also located in Wuhan, the city of 11million where the flu-like virus is believed to have spread to humans at a live wild animal market.

Hospitals in Hubei province are struggling amid the crisis which has killed at least 136 people and infected more than 6,000 others as of Wednesday afternoon.

About 60 cases, but no deaths, have been reported in 15 other countries, including France, Germany, the US, Singapore, Malaysia, Vietnam, Japan, South Korea and the United Arab Emirates.

Britain has tested more than 100 people for the virus, but all of the results have come back negative.

The UK is planning to rescue Britons who are trapped in Hubei province, the capital of which is locked down Wuhan, where flights are grounded and public transport is halted, making it impossible for people to leave on their own.

The first repatriation flight is due to leave on Thursday.

It comes after the US and Japan evacuated their citizens from the quarantined city.

British Airways has suspended flights to mainland China after the Foreign Office advised against all but essential travel to the country.

Almost all of the coronavirus cases have been in the central province of Hubei.

But in what could be a major step towards taming the disease, scientists in Australia said they had developed a lab-grown version of the coronavirus, the first to be recreated outside China.

The number of cases in China has outstripped its tally of 5,327 infected with the Severe Acute Respiratory Syndrome (SARS) coronavirus that killed about 800 people globally in 2002 and 2003.

However, some experts believe the new strain is not as deadly as SARS.

Like other respiratory infections, it is spread by droplets from coughs and sneezes, with an incubation time between one and 14 days.

There are signs it may spread before symptoms show.