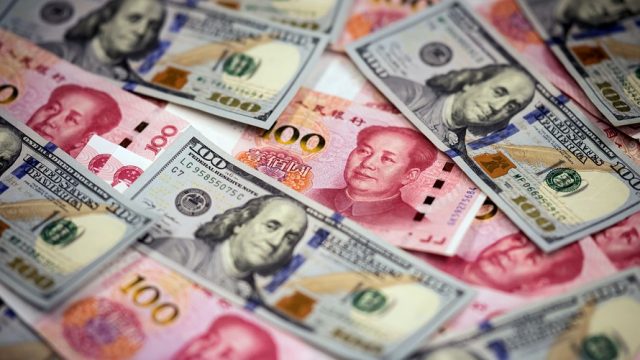 This time around, the yuan’s weakness is noteworthy but not exactly panic-inducing.

Mainland markets in China have been closed since the start of Lunar New Year celebrations in Jan. 23. In offshore trading, the yuan has declined, recently trading at 6.9849 to the dollar, according to FactSet data, after earlier weakening as far as 7.004 to the dollar.

The 7-to-the-dollar level was never identified as crucial by Chinese authorities, though it had acquired symbolic status in the minds of traders and U.S. officials. But its importance has diminished for a few reasons, said Ian Lyngen, head of U.S. rates strategy at BMO Capital Markets, in a note.

“One, the second break was always going to be less consequential than the first. Two, the yuan is still nearly 3% stronger against the dollar since September. And three, the pace of the move pales in comparison to early August,” he wrote.

But it’s still worth watching, Lyngen said, because where the yuan goes from here will be important in terms of global financial conditions and Treasury yields.

With the viral outbreak seen denting Chinese economic activity, it’s not unreasonable to expect Beijing to take steps toward a significant — and likely multifaceted — liquidity and stimulus package in the next few weeks, he said. The subsequent effect on the exchange rate, and U.S. import prices, commodities and overall investor appetite for risk could be a significant market theme for the rest of the first half of 2020.

Meanwhile, economists are attempting to gauge the potential economic toll of the outbreak.

The U.S. dollar has enjoyed some haven-related support as concerns have mounted. Global equities saw renewed pressure on Thursday as the number of infections in China — and the nation’s death toll — continued to rise. The number of cases reported outside China have also increased, with U.S. authorities reporting the first case of person-to-person transmission domestically.

But U.S. stocks erased losses in afternoon trade, with the Dow Jones Industrial Average DJIA, -2.09%  up around 20 points in late action, a gain of 0.1%, while the S&P 500 SPX, -1.77%  was trading near unchanged. Stocks turned mixed after the World Health Organization declared the outbreak an international health emergency, with analysts tying the bounce to the body’s decision not to recommend restrictions on travel to and trade with China.

Otherwise, investors had continued to bid up asset perceived as havens. That flight to safety has pushed up Treasury prices and pulled down yields, which move in the opposite direction, with the rate on the benchmark 10-year Treasury note TMUBMUSD10Y, -5.02%  stilldown 2.4 basis points at 1.567% after falling to a more-than-three-month low below 1.54%. Bond prices rise as yields fall.