The impact from a virus epidemic on China’s economy will be limited and temporary, and the country’s financial markets will return to normal in the long run, a commentary in a newspaper owned by the People’s Bank of China, the country’s central bank said on Monday afternoon.

The virus outbreak would not change China’s sound long-term economic fundamentals, the commentary in the Financial News said.

It also said a plunge in the country’s stock markets on Monday was due to some irrational factors, including panic selling triggered by a “herd effect”.

Heavy selling wiped $420 million in market capitalisation off China’s benchmark stock index at one point on Monday as investors returned from an extended Lunar New Year holiday and dumped shares and commodities on fears about the spreading virus and the potential blow to the world’s second-largest economy. 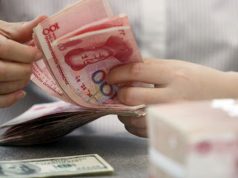