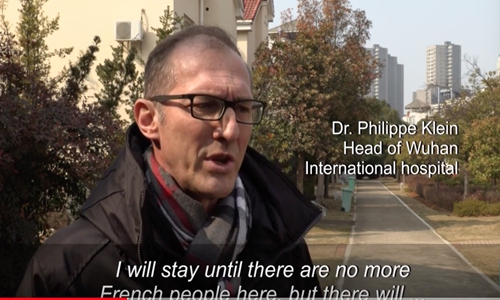 While some countries are shutting their borders and cancelling flights to China as the country battles the deadly novel coronavirus outbreak, some foreigners are standing their ground and doing their best to help and support China and its Wuhan city, center of the epidemic.
These foreign friends have won respect and appreciation from Chinese netizens for their selfless support and contribution to China during a tough time.
“Wuhan is never alone,” Philippe Klein, Manager of the International Clinic in Wuhan Union Hospital, said in an email sent to the Global Times on Tuesday.
According to media reports, Klein refused to leave Wuhan when the French government sent a plane to take French citizens out of the city.
“I will be much more useful in Wuhan than in France,” Klein said in the email, noting that he shares “the suffering and sorrow of those who welcome me with so much respect and kindness.”
As for the current situation, Klein believes that the epidemic will peak in a few days and then a gradual improvement will be seen.
He said quarantining is an exceptional measure to transform the exponential evolution of the epidemic and bring it under control, calling on Wuhan people to be patient and confident.
Spring and brighter days will eventually come to Wuhan, Klein said, noting he has no doubt that Wuhan will emerge stronger after the epidemic.
At Wuhan University, 648 international students shared Klein’s confidence that the city will win the battle against the novel coronavirus.
“I believe things will pick up soon,” a student from Russia with a Chinese name Li Jiayi told the China News Service (CNS).
“Wuhan, we will never give up on you. Stay strong!” the international students from Wuhan University said in a short video posted by the CNS.
“China appreciates and welcomes more foreign friends coming to help fight the novel coronavirus,” Zeng Guang, chief epidemiologist of the China Center for Disease Control and Prevention, told the Global Times on Tuesday, referring to US epidemiologist Walter Ian Lipkin of Columbia University’s Mailman School of Public Health, who is also known as the “virus hunter.”
Lipkin met with Zhong Nanshan, a Chinese respiratory expert and a leading scientist in research into the novel coronavirus, in Guangzhou, South China’s Guangdong Province, on January 30, to discuss the situation.