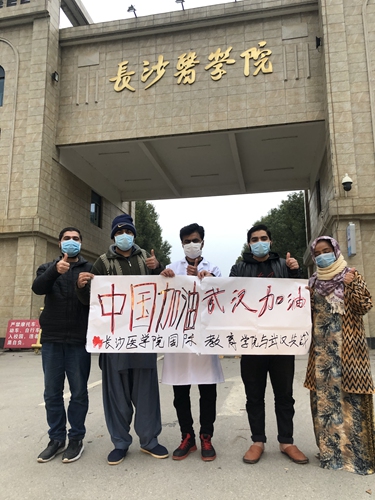 As China fights against the novel coronavirus epidemic, which broke out in Wuhan of Central China’s Hubei Province before spreading across the nation, many foreigners are staying in China to offer their help. They praised the Chinese government’s response.

In the backdrop of thousands of Chinese medical personnel going to Wuhan, many foreigners who live in Wuhan chose to stay and support the city during this tough period.

“Wuhan will never be alone,” Dr. Philippe Klein, Manager of the International Clinic in Wuhan Union Hospital, said in an email sent to the Global Times on Tuesday.

Klein refused to leave Wuhan when the French government sent a plane to take French citizens out of the city.

“I am on duty. I will be much more useful in Wuhan than in France. I chose to work in China and the Chinese accepted me so I must be an example for my Chinese team,” Dr. Klein said in the email.

There are also foreigners offering their help by joining volunteer teams or sending supportive messages.

The 29-year-old Pakistani doctor Muhammad Usman Janjua, who is tutoring at the Changsha Medical University in Hunan Province, recently applied to go to Wuhan as a volunteer medical worker, though he has yet to be formally approved.

“The news said the affected area is most in lack of a medical staff, which I think I can contribute my part,” said Usman, adding that he was deeply concerned to see China, as his proclaimed second home, suffering from the virus.

“I prepare to serve the country which has given me so much respect and love. At this time of need, I’ll do whatever I can to help the people in need,” Usman told the Global Times.

Netizens in Pakistan are cheering China on and hoping China will get over the difficulties as soon as possible, he said.

“Only unity in the face of illness can overcome it, regardless of gender or nationality!” he posted on social media.

Together with his students from other countries, including Ethiopia, Indonesia, Nepal, India, Ghana, Zambia, Nigeria and the US, Usman put up banners on his campus to show their support to Wuhan.

Usman praised China’s handling of the outbreak, referencing that the “Chinese government keeps updating information with WHO and other related authorities while domestic researchers are working day and night for an in-depth understanding of the virus.”

“Foreigners here really appreciate the steps taken by the Chinese government to halt the spread of disease. The government has also established special help hotlines for foreigners and every need is being taken care of,” he told the Global Times.

Evaluating the Chinese governments’ reaction to the epidemic as courageous and indicative of mass volunteer efforts, Dr. Klein noted it is extremely difficult to control public anxiety and to make good political and scientific decisions when in crisis.

He estimated the situation would peak in a few days and then gradually improve, calling on Wuhan residents to be patient and confident.

Timo Balz, a 45-year-old German professor at Wuhan University, was determined to stay in Wuhan with his family when they were offered to evacuate back to Germany. Though he said he was quite anxious under quarantine in Wuhan, he is convinced that “locking down a city of 11 million is certainly a bold and strong move that deserves the world’s respect.”

“Especially, the orderly fashion in which this has been done impressed me, as does the level of organization during this crisis. There is a discussion on handling the outbreak at its early stages and if the lockdown came too late. In hindsight, we can be certain of this, but this was not an easy decision to make,” Balz commented in a written interview with the Global Times.

“Official information has to be accurate and that takes time, sometimes more than we would wish in this fast-paced time. It is not the time for blaming and scapegoating, but for solving the crisis at hand. Afterwards, this will have to be investigated, analyzed, and improved for the future,” he said.

Balz told the Global Times that his colleague, Professor Wolfgang Kainz from Austria, donated masks and equipment to students in Wuhan University.

Stephen McClure, an American teacher at Wuhan University, also rejected the US embassy’s evacuation option and said he would stay in Wuhan to fight the disease with his colleagues. When he saw a Danish cartoon insulting China on the coronavirus outbreak, he called the Danish embassy in Beijing immediately to announce his opposition to it, according to a post on the university’s official WeChat account.

“Many people say, in Wuhan people like to fight. Well, let’s show them how we fight in Wuhan! Wuhan is strong and we stay strong!” Balz cheered.

More countries are offering China with the supplies needed for preventing the novel coronavirus.

Epidemic prevention and control supplies donated by 21 countries have arrived in China so far, Hua Chunying, spokesperson of the Foreign Ministry said on Wednesday.

Belarus sent an IL-76 aircraft with humanitarian aid at the end of January, carrying the most urgently needed medical supplies, including medicine, personal protective gear, and disinfectants.

Oita, which has been sister cities with Wuhan for 40 years, sent 30,000 masks it had been keeping for disaster relief purposes in boxes with a message reading “Wuhan Jiayou!” which means “Stay Strong, Wuhan!” in Chinese.

“A friend in need is a friend indeed. I’d like to thank them all,” Hua said at a Monday press conference.

Compared with the small group of people inciting anti-Chinese sentiment or spreading anxiety, more people from the international community showed their support to China to fight the virus. Dario Nardella, the mayor of Florence in Italy started an activity on Twitter on February 1 with the hashtag #AbbracciaUnCinese, which means “Embrace a Chinese,” with the aim of removing stigma among local people against Chinese amid the coronavirus outbreak back in China. The move was welcomed by many Chinese netiznes.