An Army corporal has killed a Mobile Police Officer with an Anti-Aircraft Gun (AAG) after an altercation at Makara Area of Gwoza Local Government Area (LGA), in Borno State.

PRNigeria gathered that the late Police officer would have completed his six months anti-terrorism operation on February 8, 2020.

It was also learnt that Mr. Rowland, a father of two young girls, had already planned to depart Borno this coming Saturday before he was ‘callously’ murdered by the unidentified soldier.

An eyewitness who spoke to PRNigeria described the killing of Rowland as “unfortunate and disheartening”. He said the whole drama started with an altercation between the Army corporal and another Police personnel over a girlfriend.

The eyewitness, who pleaded not to be named, said: “Some people intervened and settled the matter when the aggrieved Army corporal asked a driver of an anti-aircraft gun Hilux belonging to his military base, to turn and directly face the Limankara Police Training Camp.

“Immediately after turning the vehicle, they opened fire and shot at the Camp’s facility. It was at that moment, Rowland Tafida, the late police sergeant, was killed by a stray bullet because he was not involved the earlier altercation. The blast of the anti-aircraft vehicle totally disfigured his left leg thigh as he was returning to the camp after he went to charge his phone somewhere.

“The young MOPOL officer could have survived the terrible assault, but nobody could take him to a medical facility as he lied in his own pool of blood, bleeding profusely and bled to death.”

Another eyewitness, a woman, stated that other police officers at the Limankara camp swiftly mobilized and immediately came out to protest against the ‘brutal’ killing of Rowland by the soldier.

She added that it took the intervention of an army major, who is the most senior officer in the location, to douse the rising tension.

“It was the Army major that came out to beg the aggrieved MOPOL personnel. He was the one who restored order and normalcy, otherwise, a mayhem would have erupted.

“After begging the police officers, the major arrested the “killer” corporal, and thereafter, the Army Theatre Command, contacted the Borno Police Command.

PRNigeria later gathered that both the military and Police constituted a joint fact-finding Committee to unravel the circumstances that gave rise to the ugly incident. The Committee had apprehended the culprit and took him to Maimalari Barrack in Maiduguri. The military has also taken responsibility for the damaged facilities at the Police camp.

Speaking with PRNigeria, his aunt, Mrs. Zwancit Dazang, said nobody from either the Police or Army authorities have called to inform them of Rowland’s death.

She said their murdered son was on his way to his Police camp at Limankara, last Sunday afternoon, without even knowing what earlier transpired between his fellow MOPOL officer and a soldier when he was shot and died on the spot.

“We only got to know about our son’s tragic death in the social media. He was dressed in combat boot, jeans and a MOPOL T-shirt, with his rifle strapped on his shoulder, when he was shot.”

Dazang, wondered why an anti-craft gun will be used on a fellow security officer by another security personnel.

She said: “The anti-aircraft truck, which is a lethal ammunition, has the ability to bring down a plane or helicopter from the sky. This is a dangerous firearm or ammunition that can even destroy an armoured tank. That a soldier will use it to eliminate an innocent, but a fellow security officer like him, is unimaginable.”

Mrs. Dazang, pointed out that her and the distraught family of Rowland are yet to recover from the grim shock of his death.

She said: “A vibrant Police officer, with a very young family, in a twinkle of an eye, was deliberately killed; His life wasted just like that: What was his fault? He wasn’t killed while fighting terrorists but by a soldier while walking, unprovoked and also did not provoked anyone. So, why take his life? That is barbaric, and wicked.”

She added: “As I speak to you now, the late Rowland’s wife is emotionally-broken. She has not seen her husband for so long. And both she and their two lovely daughters of five and two years respectively were looking forward to a reunion with their husband, and father, before this unavoidable tragedy struck.

“What has Rowland done for anyone to take his life? The soldier who killed Rowland must be brought to book. Our son was there in Borno to defend his country. So, why should he be eliminated by someone he never hurt, or offended?”

Attempts by PRNigeria to get reactions from both the spokespersons of the Nigerian Army and the Police, Colonel Sagir Musa and DCP Frank Mba proved abortive as their mobile line could not be reached while text messages sent were not replied. 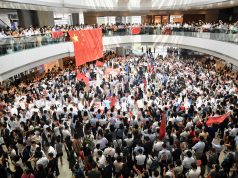 US records nearly 1,500 COVID-19 deaths in 24 hours, the worst single-day death surge in the world

Leader of Chinese investors in Nigeria decries US propaganda to hurt...