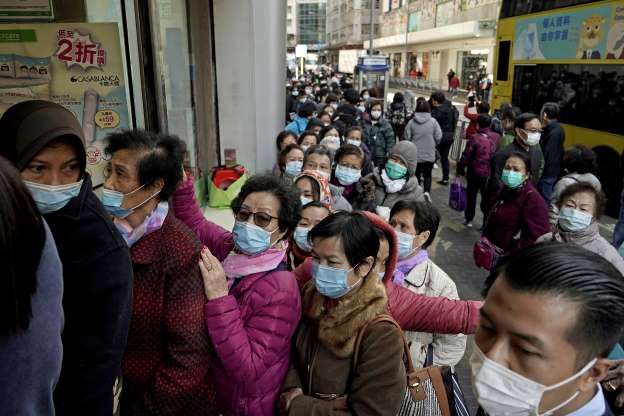 Africa is one of only two continents with no confirmed cases of coronavirus however experts have warned that it may not be long before the first case is confirmed, given its increasingly close ties to China.

At least 565 people have died with more than 28,000 confirmed cases around the world, most of them in China.

Last week the World Health Organization (WHO) declared the coronavirus outbreak a global health emergency – largely because of fears that poorer countries might not be able to cope with an outbreak.

The health systems in many African countries are already struggling with the existing workload, so can they deal with another outbreak of a highly infectious disease?

Michael Yao, WHO’s head of emergency operations in Africa, notes that some countries on the continent “have the minimum to start with – they’re not starting from scratch”.

“We know how fragile the health system is on the African continent and these systems are already overwhelmed by many ongoing disease outbreaks, so for us it is critical to detect earlier so that we can prevent the spread.”

What facilities are there at the moment to treat it?

Until early this week, there were only two laboratories in Africa – one in Senegal and the other in South Africa – which had the reagents needed to test samples. They have been working as referral laboratories for countries around the region.

One of the laboratories, Institut Pasteur de Dakar, in Senegal has long been on the front line in medical innovation in Africa, including in yellow fever research.

However this week Ghana, Madagascar, Nigeria and Sierra Leone have announced they can also conduct tests.

The WHO is also sending kits to 29 laboratories on the continent to ensure they have the capacity to deal with the virus and also help test samples from other countries if needed.

However it’s hoped that by later this month at least 36 African countries will be equipped to carry out tests specific to the coronavirus.

The ability of African nations to properly diagnose cases “depends on the new reagents being made available from China and Europe,” says Dr Yao.

The Nigerian Red Cross Society says it has placed one million volunteers on alert. Its Secretary General Abubakar Ahmed Kende said the measure was to prevent the possible spread of the virus into the country and also contain the spiralling outbreak of Lassa fever across the country.

In Tanzania, Health Minister Ummy Mwalimu announced that isolation centres in the north, east and west of the country had been identified. Thermometers have been stockpiled and more than 2,000 health workers have been trained.

Several countries including Kenya, Ethiopia, Ivory Coast, Ghana and Botswana have dealt with suspected cases, placing them in quarantine while tests were carried out. So far, all have tested negative for the virus.

Uganda’s health ministry confirmed it had quarantined more than 100 people who have arrived at Entebbe International Airport. Some of the people have been quarantined at two hospitals in Entebbe and Kampala, while others have been asked to stay in their homes.

Have any lessons been learned from Ebola?

Dr Yao was involved in dealing with the outbreaks of Ebola in West Africa in 2014-2016 and more recently in the east of the Democratic Republic of Congo. He said he was concerned that there was not enough capacity to treat critical cases of coronavirus.

“We’re advising countries to at least detect cases early to avoid spreading the new virus within the community – that will be difficult to manage,” he says.

On a positive note, many African countries were already screening passengers arriving at their ports of entry for Ebola. Countries that dealt with the Ebola outbreak still have the isolation facilities and expertise in controlling infectious diseases.

But when it comes to detection, Ebola is different to the coronavirus. Ebola only became infectious when symptoms showed however there have been reports that in some cases, the coronavirus may have been transmitted before patients were showing symptoms.

What about travel between the continent and China?

Increasingly close trade links between China and African countries have heightened concerns that the virus could spread.

China is Africa’s biggest trade partner and around 10,000 Chinese firms are currently operating throughout the continent. According to Chinese state media, more than one million Chinese nationals live in African countries.

There are also more than 80,000 African students in China, often attracted by government scholarships, reports the Guardian. A 21-year-old student from Cameroon was reported to have contracted the virus after a trip to Wuhan and is being treated in hospital.

Chinese students are also travelling to the continent, attracted again by government scholarships.

Students like Zambian Tisiliyani Salima have been in self-imposed quarantine for more than two weeks.

Every morning she wakes up to news of scores of more deaths and thousands of new cases of infections in Wuhan.

Despite the draconian measures taken across the city, there is little sign that the spread of the infection is slowing.

The argument that China is better equipped to deal with the outbreak of the coronavirus than African student’s home nations does little to calm the anxieties of many of the African students living in the surrounding province, Hubei.

There are thought to be thousands of Africans living across the province where the virus originated.

Students from Nigeria, Zambia, Tanzania, Cameroon and Ivory Coast are starting to lose hope that their governments will listen to their calls to be evacuated.

As trade links continue to increase, so does the volume of traffic between the continent and China. The number of passengers is now a concern.

Dr John Nkengasong, director of the Africa Centres for Disease Control and Prevention, wrote in the journal Nature that the rapid spread of the coronavirus in Asia as a result of air traffic and vast population movements, should be of significance in Africa.

The 2002 outbreak of the Severe Acute Respiratory Syndrome (Sars) largely spared the continent with only one imported case reported in South Africa “but air traffic between China and Africa has risen by over 600% in the past decade as a result of the rapid expansion of Chinese investment in Africa”, he writes.

Many airlines across the world have suspended flights to and from China. In response, airlines in Africa have been under intense public pressure to halt flights. The airlines of Egypt, Kenya, Morocco and Rwanda have halted flights but the continent’s biggest airline – Ethiopian Airlines – has carried on with operations.

The WHO has advised against travel restrictions and instead identified 13 top priority countries in Africa, which because of their direct links or high volume of travel to China need to be particularly vigilant. It plans to have support staff in all 13 countries by the end of the week.

“A new and unknown virus is often scary and many people are worried,” says Dr Matshidiso Moeti, WHO’s regional head for Africa. “But all efforts to combat the novel coronavirus must be based on sound science.”