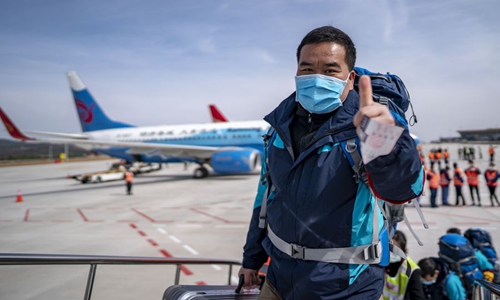 Frontline workers are being ordered to take compulsory breaks after work days in the battle against the novel coronavirus epidemic, as dozens of police officers and medical personnel have died in their posts due to infection, overwork and accidents.

Public security authorities across China have been sending orders to their staff members who have been working non-stop since the epidemic broke out to force them take some rest, China Central Television (CCTV) reported on Wednesday.

Many of these people held checkpoints at traffic-intensive areas for more than 10 days without rest to stop the virus from spreading, and some of them have elders or children to take care of back home, CCTV reported.

Thanking them for their contributions, the public security authorities asked them to take compulsory breaks to stay healthy or stay with their families, some for two to three days and some without giving an exact time frame.

About 20 police officers have died as of February 11, according to a report released on the WeChat public account of the Central Political and Legal Affairs Commission of the Communist Party of China. This number has not stopped increasing as similar reports have come in.

Many of them died because of heart attack and cerebral hemorrhage from likely overwork, and some others died in traffic accidents, the report said.

Medical personnel treating COVID-19 patients are also stressed with manpower and supply shortages. More than 3,000 medical workers have been infected with COVID-19 as of February 11, and at least seven of them have died, according to a report of the Chinese Center for Disease Control and Prevention on Monday, China News Service reported on Monday.

“I don’t want to see martyrs, I want to see you all return home safe,” according to a typical comment.