Retail electricity prices are tipped to fall by 7.1% by 2022 – an average saving of $97 per household – according to the Energy Security Board.

In its latest report on the health of the national electricity market, to be released on Monday, the ESB credits new low-cost renewable generation for driving down wholesale prices and warns that severe weather and ageing coal power plants are threatening reliability of supply.

Lead by Tasmania, which uses almost 100% renewables, and South Australia, with 53%, Australia is in the top tier of renewable share alongside Ireland, California, Germany, Spain and Portugal.

Renewables supply 10-20% of power used in Queensland, New South Wales and Victoria, but this proportion is growing rapidly, it said.

“What is uniquely Australian is the high proportion of rooftop solar PV generated. This is now about 5% of total NEM generation and by 2030 it is expected to be 10%.”

The ESB warned its greatest concern is security, and noted that the Australian Energy Market Operator had to intervene twice as often last year to prevent major failures due to inappropriate levels of frequency, voltage, inertia and system strength.

It found since 2005 total emissions across the national electricity market have fallen 15%, with emissions predicted to fall a further 26% to 41% below 2005 levels by 2030.

“This trend in emissions reflects the planned closure of ageing coal and gas fired generation, and its replacement by renewable generation and a variety of large and/or small scale storage projects.”

The ESB noted that AGL’s Liddell coal-fired power plant is expected to close in 2023-24, adding that anticipated exit of coal-fired power will mean “security issues will take some time to manage”.

The ESB said reliability of electricity supply has improved but “is still very tight during summer peak demand in Victoria, NSW and SA”.

The ESB noted affordability had “improved slightly” due to a modest decline in retail margins, the introduction of the new default market offer and other measures to help customers shop around.

Despite forecasting a 7.1% decrease in electricity prices in the period to 2021-22, the ESB noted that low income households would continue to be “disproportionately affected by high energy costs”.

“Energy is a high proportion of their expenses and the options for decreasing bills, such as energy efficient appliances and rooftop solar PV, are less available.”

The ESB found that new renewable generators “are experiencing some difficulties with network constraints, emphasising the need for this work and the ongoing reconfiguration of the grid”.

The energy and emissions reduction minister, Angus Taylor, said the report demonstrated the government “is delivering policies that are driving down electricity prices and build resilience into our national electricity supply”.

Taylor noted the report’s finding that Australia creates $294m of GDP for every petajoule of energy consumed, up more than $50m, or 20%, on a decade earlier.

On Friday Anthony Albanese announced Labor would adopt a target of net zero emissions by 2050 if it wins the next federal election, without the use of carryover credits from the Kyoto period.

In response, Morrison government ministers were publicly at odds about whether Australia would take a long-term emissions reduction target to global climate talks in November.

The energy and emissions reduction minister, Angus Taylor, committed to revealing a “long-term strategy”, believed to be the technology investment roadmap foreshadowed by Scott Morrison.

The Morrison government has committed $4m for a feasibility study for a 1GW “high efficiency, low emissions” coal plant at Collinsville, but refused to say if the project would receive further taxpayer support. 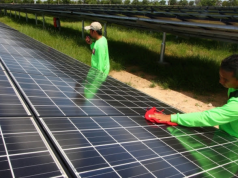