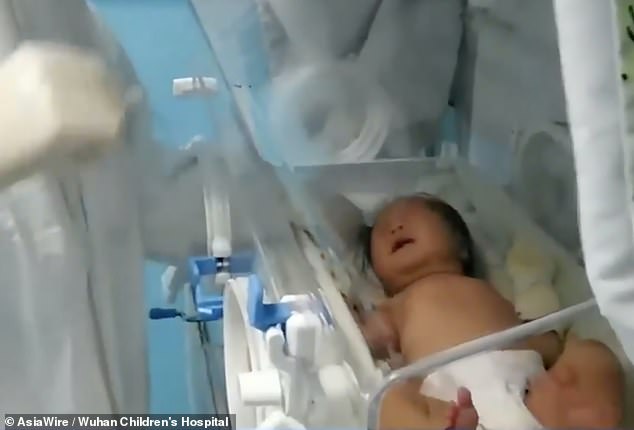 A 17-day-old baby has recovered from the novel coronavirus after being born to a confirmed patient in Wuhan.

The newborn is the youngest patient to have recovered from the virus in China so far, reported state media.

She left the hospital on Friday after making a full recovery on her own without the help of medication.

The baby was transferred to Wuhan Children’s Hospital on the same day she was born, according to People’s Daily. She was found to have the virus shortly after.

The girl, known as Xiao Xiao, had an infection in her respiratory system and minor myocardial damage, said Dr Zeng Lingkong, director of the Department of Neonatology at the hospital.

Because the girl’s symptoms were not obvious, doctors decided not to give her antibiotic medication and let her overcome the disease on her own.

‘She did not have obvious difficulties in breathing, did not cough or have fevers, therefore we only gave her treatment for her myocardial condition,’ Dr Zeng told state broadcaster for CCTV.

She was allowed to go home on Friday afternoon after receiving negative results in three consecutive nucleic acid detection tests.

Dr Zeng said the baby had recovered fully from coronavirus as well as her heart disease.

‘She even grew bigger and fatter here,’ Dr Zeng said.

Doctors in China have feared the possibility that the infection could be passed from mothers to their babies in the womb.

Earlier this month, a baby born to a coronavirus patient was diagnosed with the deadly disease 30 hours after being delivered in Wuhan.

‘This reminds us to pay attention to a potential new transmission route of the coronavirus – vertical transmission from mothers to babies,’ Dr Zeng said at the time.

The new coronavirus has killed 2,592 people in China, infected some 77,000 so far and paralysed its economy.

The country’s oldest patient yet is a 96-year-old woman who recovered from the disease after being treated in intensive care units for three days.

Globally, the coronavirus epidemic has killed at least 2,628 people, infected more than 79,700 and spread to at least two dozen countries.