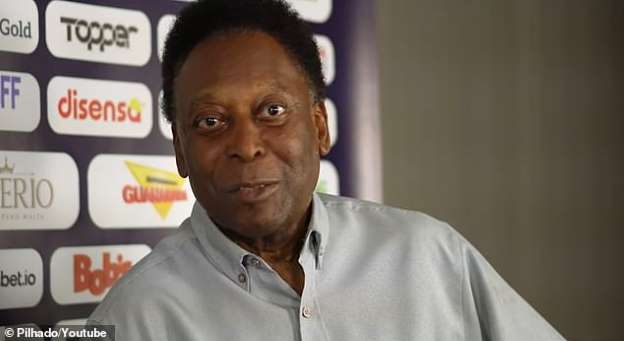 In the never-ending debate surrounding Cristiano Ronaldo and Lionel Messi, the former has support from arguably football’s greatest-ever player.

Brazil legend Pele has added his opinion about who is the current world’s best between Ronaldo and Messi – with the three-time World Cup winner plumping for Ronaldo.

Ronaldo and Messi have been regarded as the world’s leading duo for more than a decade – sharing 11 Ballon d’Or awards between them.

But despite Messi edging that battle (six titles to five), Pele would rather have Ronaldo in his team.

‘Today the best player in the world is Cristiano Ronaldo,’ he told YouTube channel Pilhado.

‘I think he’s the best, because he’s more consistent, but you can’t forget about [Lionel] Messi, of course, but he’s not a striker.’

Although, the 79-year-old was effusive in his praise of Ronaldo he did point out that there have been some legendary figures before him and Messi. And when comparing the duo to legendary names of yesterday – there was no doubt in his mind who comes out on top… himself.

‘It is a question that is difficult to answer,’ he replied when asked who is the best to have played the beautiful game. ‘We cannot forget about Zico, Ronaldinho and Ronaldo.

‘And in Europe, Franz Beckenbauer and Johan Cruyff.

‘Now, it’s not my fault, but I think Pele was better than them all.’

Speaking last week about his health, Pele once again denied claims that he is struggling to come to terms with his mobility problems after undergoing a hip operation.

The former Brazil striker’s son Edinho told TV Globo last month that his father was ’embarrassed’ to leave home due to his hip issues, which causes ‘a certain depression’.

But Pele, widely considered one of the best footballers to ever play the game, has insisted those close to him ‘invented that I was depressed’ and that, in reality, he is ‘fine’.

‘This depression thing, I don’t know if they got it wrong because in the last two years I had a bruise, a femur operation and then, when I started training or making a commercial, I had to stop,’ he told CNN.

‘They started to worry and I really appreciate it, but then they invented that I was depressed. I got here with a walker but, thank God, I only can’t ride a bike.

‘Even some of the times when I was hurt, bruised, I did not fail to give an interview and I said that I was sad because I had been injured.

‘That is exactly what I am going to talk about now: I would rather have arrived here without a walker, doing a little training, playing ball. But I’m recovering and, thank God, after everything I’ve done in sports, I’m fine. Thank goodness I’m recovering.’

Pele has suffered from hip trouble for a number of years and now needs a frame to walk. Many of his recent public appearances have been in a wheelchair.

‘He’s pretty fragile. He had a hip replacement and didn’t have an adequate or ideal rehabilitation,’ Edinho said last month.

‘So he has this problem with mobility and that has set off a kind of depression. Imagine, he’s the King, he was always such an imposing figure and today he can’t walk properly.

‘He’s embarrassed, he doesn’t want to go out, be seen, or do practically anything that involves leaving the house. He is very sheepish, reclusive.’