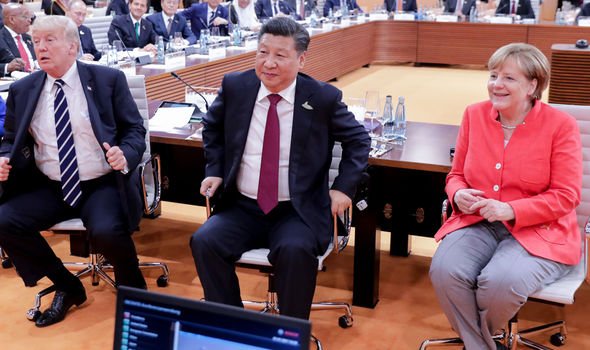 Germans now see their country’s relationship with China as nearly just as important as its relationship with the United States — a stark change in mindset from a year ago and with the coronavirus pandemic now upending the world, according to a new survey released Monday.

The report from the Pew Research Center, in partnership with Körber-Stiftung, a nonprofit organization in Germany that examines political issues, shows that 37% of German respondents say they prioritize their country’s relationship with the U.S., with China close behind at 36%. A year ago, the difference was 50% to 24% in favor of the United States. Thirteen percent of those surveyed said it was important for Germany to have a close relationship with both countries.

The results point to a continued fraught relationship between Germany and the U.S. When the same survey was conducted in the fall of 2018, most German respondents said their country’s relationship with America was bad and that additional cooperation with the U.S. was not essential.

In Pew’s most recent survey, however, not much has changed from the American perspective compared to a year ago. Nearly the same share of American respondents prioritize relations with China and Germany. The survey also found that 44% of German respondents see France as their country’s most important foreign policy partner, while only 10% of those surveyed view the U.S. as the most important partner.

“Compared with previous years, Germans are increasingly negative about their relationship with the U.S., even as both Americans and Germans expect international relations to change after the pandemic,” the report reads.

While this survey might be more of a snapshot than a trend, it does capture “the mood of the moment,” says Daniel Hamilton, the Austrian Marshall Plan Foundation professor at Johns Hopkins University with an expertise in transatlantic relations. Hamilton says that Germans’ views of the U.S. captured in the report have a lot to do with President Donald Trump.

“When most Germans think about the U.S., they fixate on Donald Trump, who they roundly despise.”

Hamilton points to allegations in March that the Trump administration tried to gain access to a COVID-19 vaccine being developed by a German firm called CureVac, Reuters reported. CureVac denied the allegations, according to Politico. Regardless, the reports were “all over the German media,” Hamilton adds. He also notes the negative reaction to the U.S.’s travel ban on European countries — including Germany — back in March.

“This is all soured public opinion,” Hamilton says.