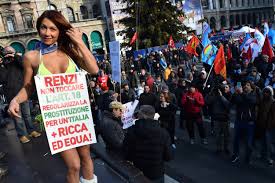 Swiss politicians have decided that sex workers can soon get back to business while activities and sports involving close physical contact such as judo, boxing and wrestling will remain prohibited.

Prostitution is legal in Switzerland and can resume from June 6, along with cinemas, nightclubs and public pools, the government announced this week. Yet sports and activities that involve â€œclose and constantâ€ physical contact will continue to be forbidden in an effort to stop the spread of the coronavirus.

Switzerland has dramatically slowed its Covid-19 infection rate while avoiding the strict confinement imposed in neighboring countries including Italy and France. New reported cases of infections in the country of 8.5 million were below 20 per day this week.

It was among the first countries in Europe to reopen shops, restaurants and schools earlier this month while easing social-distancing measures. Spontaneous public gatherings of as many as 30 people and events of no more than 300 will also be allowed from June 6.

The Swiss ruling contrasts with policy decisions in the Netherlands, home to Amsterdamâ€™s famed red-light district. Dutch Prime Minister Mark Rutte said at a press conference Wednesday that while gyms and saunas will likely reopen July 1, sex workers wonâ€™t be able to resume business until September.