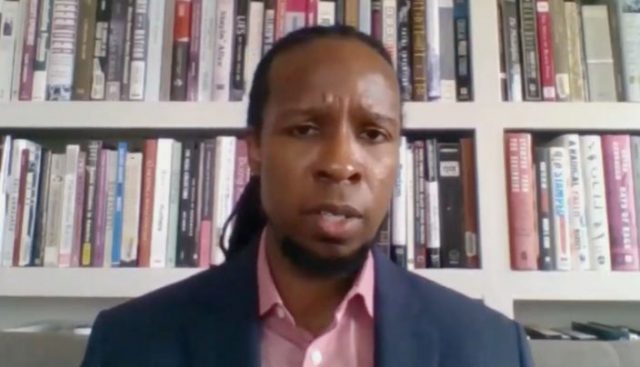 Even as President Trump and many of his allies are rushing to reopen the nation from a months-long pandemic lockdown, that pandemic continues to devastate communities of color, a raft of witnesses warned legislators on Capitol Hill on Wednesday.

The pandemic, they said, was being compounded by long-standing government divestment in areas like health care and broadband Internet. Those warnings came as a stark rejoinder to images of crowded beaches in parts of Florida and California.

In fact, as some parts of the country recover, others remain in the heat of the battle against the coronavirus. But because some of those places, including prisons and Native American reservations, are largely out of public view, struggles with the coronavirus have been essentially invisible to the nation at large.

Wednesdayâ€™s hearing of the House Ways and Means Committee, conducted remotely and titled â€œThe Disproportionate Impact of COVID-19 on Communities of Color,â€ was intended to highlight the fact that the disease that causes the coronavirus is far from a distant memory for many Americans. But by inviting a conservative economist as their witness â€” and referring frequently and favorably to his pro-reopening arguments â€” the committeeâ€™s Republicans seemed to indicate that their sole focus was on recovery.

Political forecasters believe that the extent and success of recovery from the pandemic, which has so far killed 100,000 Americans and left more than 30 million without jobs, will determine whether President Trump holds on to the White House and down ballot Republicans retain their seats. But for Democrats and many of their allies, talk of an economic recovery is premature.

Among the witnesses was Ibram X. Kendi, a professor at American University in Washington D.C., whose book, â€œHow to Be an Antiracist,â€ has been widely praised for its recommendations on how to combat systemic racism. In his opening remarks to the committee â€” which conducted the hearing virtually â€” Dr. Kendi called the coronavirus a â€œracial pandemic within the viral pandemic.â€

The Centers for Disease Control and Prevention, which has found a â€œdisproportionate burden of illness and death among racial and ethnic minority groups,â€ appears to confirm that assertion. And a study by Amfar, the Foundation for Aids Research, found that majority-black counties accounted for nearly half of COVID-19 cases and 58 percent of COVID-19 deaths.

People of color are more likely to work jobs that have been deemed â€œessential,â€ including those in retail, agriculture and municipal services. Wealthier, whiter Americans, meanwhile, are more likely to have the kinds of jobs that allow them to work from home, thus avoiding situations where infection is likely.

Other witnesses drew attention to the needs of the communities with which they work. Dr. Alicia Fernandez of the University of California at San Francisco, for example, said that while telehealth was a promising development, unless Spanish-language services were available, such services would remain out-of-bounds for many in the Latinx population.

Dr. Raynal Samoa highlighted the plight of Pacific Islanders, whose multigenerational living arrangements he said made them more privy to contract the coronavirus. Dr. Samoa, an endocrinologist at the City of Hope cancer hospital in Los Angeles also described Pacific Islanders as especially susceptible to the disease because of what he said were their â€œextremely high rates of chronic disease such as diabetes, certain cancers and heart disease.â€

Dr. Thomas Sequist, chief patient experience and equity officer at Mass General Brigham in Boston, painted a troubling portrait of how the coronavirus has ravaged Native American lands. Dr. Sequist, who belongs to the Taos Pueblo tribe of New Mexico, put the matter bluntly, in the form of a rhetorical question: â€œHow do you battle a pandemic effectively without running water or electricity?â€

Dr. Sequest was referring specifically to Navajo Nation, a native American reservation that in recent weeks has become a coronavirus hot spot. In fact, the reservation gained the distinction of having the highest per-capita infection rate in the nation. Previously, the highest infection rates had been recorded in and around New York City, which is both much more densely populated and has many more visitors than the impoverished Navajo communities of the Southwest.

This was the second day in a row that the Navajo Nation outbreak was discussed in a congressional hearing. The day before, Rep. Gerry Connolly, D-Va., pressed the inspector general of the Department of Health and Human Services to investigate how Zachary Fuentes, a former top aide to President Trump, won a contract to supply N95 respirators to two Navajo Nation hospitals. Fuentes has no experience in medical device procurement; some of the masks he supplied to the Navajo hospitals may not meet medical standards.

The sole Republican witness was Douglas Holtz-Eaken, a conservative economist who served as director of the Congressional Budget Office during the George W. Bush administration. Dr. Holtz-Eaken is a proponent of tax cuts, which tend to benefit wealthier individuals. In his opening statement, Dr. Holtz-Eaken advocated for a broad reopening of the economy, which he asserted would help all Americans.

Republicans returned to that argument repeatedly, for the most part avoiding substantive discussion of racial disparities. There is now a single Republican African-American member of Congress: Sen. Tim Scott of South Carolina.

While the hearing served to highlight racial disparities, there were few concrete proposals to correct them, given how deeply entrenched they are in American society. One novel proposal came from James Hildreth, who heads the Meharry Medical College in Nashville. (Meharry is a historically black college and university, or HBCU).