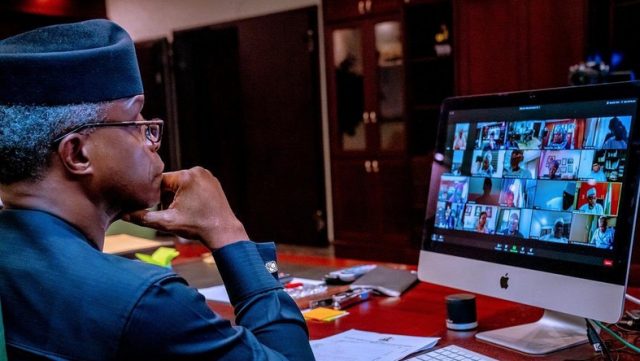 Vice President Yemi Osinbajo made the announcement on Tuesday in Abuja at a visual meeting to launch the Dukia Gold project.

“Within this project, we are also commissioning the nationwide Dukia-Heritage Bank Gold and Precious Metals Buying Centres – part of a valuable private sector collaboration.

“This provides a sustainable way for Nigerians to exchange their gold jewellery and other precious items for cash.

“This system of exchange not only helps encourage a culture of recycling, but will also serve as a complementary source for the raw materials needed for the Dukia Gold & Precious Metals Refining Company,” he said.

The vice president added that the buying centres would also enable responsible management of electronic waste.

He maintained that as much as possible, the federal government would continue to provide support and facilitating policies for the Dukia Gold Project, to ensure successful deployment, implementation and sustainable operations.

Osinbajo said some of the policies were already in the pipeline and that the presidency would continue to support the mining sector in every way possible.

The News Agency of Nigeria (NAN) reports that Dukia Gold and Precious Metals Refinery Project was championed by the High Commissions of Nigeria and Canada.

The vice president expressed satisfaction that the project which had been in the planning stage for seven years, was ready to begin operation.

He observed that Nigeria had potential reserves of 200 million ounces of gold, adding that the launch of the project would create new opportunities for the country to mine its gold reserves properly.

He noted that the project would also ensure responsible trade and local refining of the mineral, saying that it was an extremely valuable new source of trade, jobs and foreign exchange.

Osinbajo further noted that the project would create primary employment for local artisanal miners and mining cooperatives across the solid minerals value chain.

He said off-take agreements between Dukia Gold and local mining communities and owners of recyclable gold, would be a useful provider of jobs in the post-COVID-19 economy.

He added that the positive multiplier of the project was expected to extend further, especially as the Dukia Gold project would also encourage the emergence of smaller-scale mining companies.

Osinbajo said some of the companies would for the first time have a transparent and welcoming market for their mined gold and precious metals.

He thanked Heritage Bank and commended its management for their involvement and invaluable contributions to the future of Nigerian gold production, refining and trading.

The vice president commended efforts of the Minister of Mines & Steel Development, Mr Olamilekan Adegbite and his team.

He also commended the Federal Ministry of Foreign Affairs and the High Commissions of Nigeria in Canada, United Kingdom and Foreign Missions, for providing the enabling environment and support for the actualisation of the project.

Speaking at the meeting, the minister of mines and steel development expressed optimism that the initiative would create jobs and wealth in the country.

Owolabi said the support would be in the area of providing enabling environment, facilitation and fiscal monetary policy and other economy incentives..

She noted that the abundant gold deposit in the country which awaited mining and beneficiation, translated to a value chain opportunity in excess of $200 billion dollars.

While saying that the market was large enough, Owolabi expressed confidence that the company would make a success of the initiative and available opportunities.