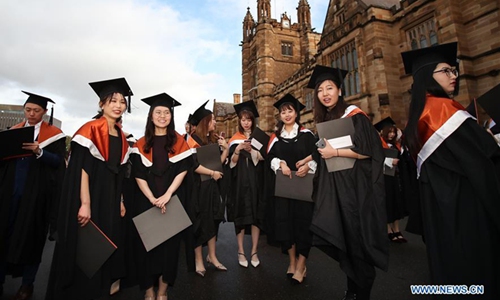 Australian universities’ and officials’ denials of racism as an argument against a Chinese education alert shows that they are blind to abundant evidence online, and students reached by the Global Times said they agree with the warning and are reconsidering their study plans.

The chief executive of schools association Group of Eight, Vicki Thomson, argued against a Tuesday warning by the Chinese Ministry of Education (MOE) advising students to fully assess the risks of the pandemic and racist discriminations and be cautious in traveling to Australia for overseas study.

The education alert came days after China’s Ministry of Culture and Tourism issued a travel alert for racist risks in Australia.

Thomson said that the Chinese Embassy in Australia could not outline the incidents the MOE was referring to. But a tally of racist incidents was given on Monday by the Chinese Foreign Ministry in response to a question about the travel alert, and abundant evidence has been reported even by Australia’s own media.

Chinese and other Asians have suffered from racist attacks in Australia, especially amid the pandemic. From January to April, the state of New South Wales received 241 complaints for racial discrimination while the number was 22 from March to the beginning of May in the state of Queensland, said Hua Chunying, spokesperson of China’s Foreign Ministry at press conference on Monday.

A database of racist incidents against Asian Australians received 178 responses in two weeks in April, the Guardian reported.

In March, a Chinese student from Hong Kong was punched in the face and injured for wearing a face mask, and a pair of Chinese students were attacked by local gang members in broad daylight in April.

Chinese business owners were also targeted, finding racist slogans outside their shops and restaurants, or their properties being vandalized.

The Global Times interviewed a dozen Chinese students enrolled or admitted to Australian universities, who said they have detected an obvious racist trend through social media and were reconsidering their study plans. They deemed the education alert quite reasonable.

“There have always been racist incidents but the discriminatory sentiments obviously rose during the pandemic, and I’m not sure what lies ahead if I return,” the student surnamed Qin said, noting even though the campus is safe, hanging out with friends and shopping could be dangerous.

Qin was considering taking a gap year to do some internship in China.

Shen Yahui, another Chinese student, decided to give up his PhD offer from the University of Adelaide, citing the pandemic and anti-Chinese atmosphere. Prior to that decision, his visa had been delayed without a specific reason for more than a year.

Campuses are actually not free from racism. An Australian student named Drew Pavlou reportedly put a sign on the wall of the University of Queensland’s Confucius Institute that said it was a COVID-19 “biohazard.”

Pavlou was then suspended for two years for inciting racism but discrimination in a subtler manner could escape punishment, such as racial slurs.

Du Jiafeng, currently a PhD candidate, has encountered such insults many times during his 10 years’ stay in Australia and noted that schools are eager to deny claims of racism because they are worried about money, not Chinese students’ situation.

Some 229,000 Chinese students comprise 28 percent of all international students studying in Australia, according to data released by the country’s Department of Education for 2019.

Chen Hong, director of the Australian Studies Center at East China Normal University in Shanghai, told the Global Times on Wednesday that instead of pretending racism does not exist, Australian authorities should do their best to eradicate the root of anti-China sentiment and take concrete measures to improve the environment for international students.

Some government officials and Australian media outlets should be blamed for the unfriendly atmosphere as their groundless and irresponsible criticism of China stoked such sentiment.

Students and analysts also dismissed Australian Federal Education Minister Dan Tehan’s assertion on the pandemic. “Our success at flattening the curve means we are one of the safest countries in the world for international students to be based in right now,” the minister said.

But such claims did not dispel students’ concerns as the new semester starting in July overlaps with the Southern Hemisphere’s winter season, which could see a surge in coronavirus cases.

The country has recorded 7,275 infections so far, but resumption of school could mean danger as the pandemic has not been brought under control.